The biologist in charge 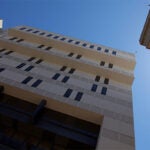 Biology Professor Brian Farrell has taken the reins of Harvard’s David Rockefeller Center for Latin American Studies (DRCLAS), with an eye toward strengthening scientific ties between Harvard and Mexico, the Caribbean, and the nations of Central and South America.

Farrell, who has conducted extensive molecular and ecological research on beetles and other insects from Central America and the Caribbean, is just part of the changed leadership team at the center. Ned Strong, longtime director of the center’s office in Santiago, Chile, took over as executive director when Farrell became director on July 1.

“DRCLAS is a leading University-wide center, with vibrant engagement from faculty and students and a splendid staff,” said Vice Provost for International Affairs Jorge Dominguez, the Antonio Madero Professor for the Study of Mexico. “It was very ably led by Professor Merilee Grindle. We are all now fortunate that Professor Brian Farrell has become the new director. Brian’s scientific research has long involved him in Latin American countries; he has also taken students for scientific field research to the region through Harvard Summer School. This combination of his research and teaching focused on Latin America shines a light on a bright future for DRCLAS, building on his prior years of service as a member of the center’s collective leadership.”

Farrell echoed Dominguez’s praise of Grindle, Edward S. Mason Professor of International Development Emerita, and of former executive director Kathy Eckroad, for leaving the center with robust core programs that assist faculty work in the region, sponsor a range of student activities there — including a two-month summer internship that places 200 to 300 Harvard students in businesses, governments, nonprofits, and other organizations across the region — as well as other scholarly exchanges.

The center, founded in 1994 to strengthen research and teaching on Latin America, has three offices in the area: a regional office in Santiago, the Brazil office established in São Paulo in 2006, and the Mexico and Central America office, opened in Mexico City during the 2012-13 academic year.

“We’re all about furthering the mission of the University in the context of Latin America,” Farrell said.

Farrell has had long involvement with the center. He served on its executive committee for the last eight years and has received grants for faculty research in the region. One grant was for acoustic studies of biodiversity, and a second restored and digitized important natural history collections of plants and insects. Both grants were at the Universidad Autónoma de Santo Domingo in the Dominican Republic and included training for many students, including three eventual Fulbright recipients. Farrell was himself a Fulbright scholar at Santo Domingo in 2011-2012. Back in Cambridge, he regularly hosts students and postdoctoral fellows from South America.

“Organizationally, it’s great; DRCLAS runs very well,” Farrell said of the center. “I’ve seen that firsthand, being on the executive committee. It’s really an effective team, a family, with a great group of individuals, and I was especially thrilled when Ned Strong expressed interest in moving from Chile to join us in the Cambridge office.”

Strong has been at the center since 2010, serving as the program director in Chile, a post in which he’ll continue while a search for his successor proceeds. Previously, he worked since 1983 at the nonprofit Academic and Professional Programs for the Americas (LASPAU), where he was executive director from 1997 until 2010. He has a master’s degree in public administration from the Harvard Kennedy School, is a former Peace Corps volunteer, and led a 1999 expedition that charted the source of the Amazon River.

“I’ve known Brian for a long time; we’ll be a great team,” Strong said. “We share interests in not just traditional fields, but have a real interest in technological and scientific collaborations with institutions across Latin America.”

Farrell and Strong agreed that the center has an array of successful programs and a strong staff, even though there are areas for potential growth. They identified strengthening regional programs and collaborations in the sciences as an important point of future emphasis. Strong pointed out that there are already significant scientific collaborations, including major efforts in astrophysics in which roughly 30 faculty members and postdocs travel to Chile each year to work at one of three telescopes.

“My desire is to develop the sciences,” Farrell said. “Though we do support scientists working on or in Latin America, we can do much more.”