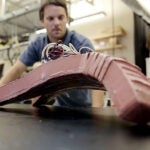 Cutting the cord on soft robots

A biologically inspired smart suit that fits under clothing and could help soldiers walk farther, tire less easily, and carry heavy loads more safely has been given a boost that could be as much as $2.9 million.

The Wyss Institute for Biologically Inspired Engineering at Harvard University announced today that it has been awarded a first-phase, follow-on contract from the Defense Advanced Research Projects Agency (DARPA) to further develop its Soft Exosuit — a wearable robot — alternative versions of which could eventually help those with limited mobility as well.

Technologies developed by DARPA’s Warrior Web program aim to prevent and reduce musculoskeletal injuries for military personnel, but can have civilian applications, too. The suit could reduce long-term health care costs and enhance the quality of life for people on and off the battlefield.

The award is the first of what could be a two-phase contract, and it enables Wyss Institute core faculty member Conor Walsh and his team to build upon their earlier work (also funded by DARPA) demonstrating the proof-of-concept of this radically new approach to wearable robot design and fabrication. Inspired by a deep understanding of the biomechanics of human walking, Soft Exosuit technology is spawning development of entirely new forms of functional textiles, flexible power systems, soft sensors, and control strategies that enable intuitive and seamless human-machine interaction.

The lightweight Soft Exosuit overcomes the drawbacks of traditional, heavier exoskeleton systems, such as power-hungry battery packs and rigid components that can interfere with natural joint movement.

“While the idea of a wearable robot is not new, our design approach certainly is,” said Walsh, an assistant professor of mechanical and biomedical engineering at Harvard’s School of Engineering and Applied Sciences (SEAS) and founder of the Harvard Biodesign Lab.

The lightweight Soft Exosuit overcomes the drawbacks of traditional, heavier exoskeleton systems, such as power-hungry battery packs and rigid components that can interfere with natural joint movement. It is made of soft, functional textiles woven into a piece of smart clothing that is pulled on like a pair of pants, and is intended to be worn under a soldier’s regular gear. The suit mimics the action of leg muscles and tendons when a person walks, and provides small but carefully timed assistance at the leg joints without restricting the wearer’s movement.

In a current prototype, a series of webbing straps around the lower half of the body contain a low-power microprocessor and a network of supple strain sensors. These act as the “brain” and “nervous system” of the Soft Exosuit, respectively, continuously monitoring various data signals, including suit tension, wearer position (walking, running, crouched), and more.

“Over just a couple of short years, Conor and his team will work to fundamentally shift the paradigm of what is possible in wearable robotics,” said Wyss Institute director Don Ingber. “Their work is a great example of the power of bringing together people from multiple disciplines with focused resources to translate what first seems like a dream into a product that could transform people’s lives.”

In addition to its military application, the team will collaborate with clinical partners to develop a medical version of the suit that could greatly benefit stroke victims, for example, whose gait often becomes slow and inefficient.

Under the terms of the contract with DARPA, the Wyss Institute will receive up to $2.9 million for its work on Warrior Web, with full funding contingent on meeting a series of technical milestones.