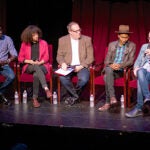 Harvard scholars reflect on the bicentennial of our heartfelt, hard-to-sing national anthem

During the War of 1812, on the rainy morning of Sept. 13, 1814, British troops launched a land and sea attack on Fort McHenry, a star-shaped U.S. stronghold built to guard Baltimore from naval assault. Despite the relentless cannonade, the fort’s commander, George Armistead, refused to surrender.

“The British bombardment went on until the morning of September 14, when their guns fell silent” writes author A.J. Langguth in his book “Union 1812: The Americans Who Fought the Second War of Independence.” “The siege had lasted twenty-five hours. Armistead estimated that that as many as 1,800 shells had been fired at his fort. A fraction of them had fallen short. More had burst in midair, showering the Americans with shrapnel.”

One American had a front-row seat for that battle, which played out 200 years ago this week.

Guarded by British troops, lawyer and amateur poet Francis Scott Key watched from a sloop, the Minden, as bombs rained on Fort McHenry in that memorable battle from the largely forgotten war. But what hasn’t been forgotten is Key’s resultant, iconic poem. Inspired by the American troops who repelled the attack, Key hastily penned four verses on the back of a letter to commemorate the fight and the giant American garrison flag that still flew as dawn broke over the fort on Sept. 14.

The poem “The Defence of Fort McHenry” would become the American national anthem, “The Star-Spangled Banner.” In advance of its 200th birthday, several Harvard scholars reflected on the song’s legacy, its language, and its lyricism.

Key eventually set his ode to music, ironically using the tune from a popular English song.

“It was a British tune. It’s an inherited tune. It wasn’t one written in the U.S., which is really interesting,” said Carol Oja, the chair of Harvard’s music department. “So our national anthem has words by an American and has this tune that is trans-Atlantic, almost a kind of postcolonial tune.”

That tune is now part of the nation’s collective soul. But, as many a musician will tell you, it isn’t easy to sing. Anyone who has attended a baseball game, watched the Super Bowl, been to a Fourth of July celebration, or any number of patriotic or sporting events has likely hummed or sung along to what is an enduring symbol of national pride. They’ve also probably dropped out when the going gets tough. The lines “rockets’ red glare,” “bombs bursting in air,” and “land of the free” include the anthem’s highest and hardest notes, and have humbled some of the most accomplished singers.

“The range is so large, an octave and a half,” said Harvard’s Gund University Organist and Choirmaster Edward Jones, who has arranged “The Star-Spangled Banner” for various choirs to perform. The song can sound strange when soloists sing it because they are “too low at the start,” hoping to bring those high notes home, said Jones, or they finish singing “too high at the end.”

Oja, Harvard’s William Powell Mason Professor of Music, agreed the song is challenging. “It’s a melody that’s got some disjunctions and just got some twists and turns in it that don’t sort of naturally fall in the voice,” she said. “There’s a lot in it musically for someone who’s singing it as a solo that leaves them exposed.”

Perhaps that’s why Oja’s favorite version of the song doesn’t involve vocals at all but is by the young Jimi Hendrix, with his “brilliant, basically deconstruction of ‘The Star-Spangled Banner.’”

Oja was referring to the guitarist’s interpretation of the anthem, considered both subversive and sublime, that he played during the musical festival in Woodstock, N.Y., in 1969. “To have chosen that emblem of patriotism, to have stood up there with an electric instrument, to have just shredded it, on the one hand, but also to have given it a whole new beauty,” she said, “his performance is really something.”

According to one Harvard historian, during much of the 19th and the early part of the 20th centuries, another song had a greater hold on the nation’s patriotic soul.

Both songs are martial hymns “that speak to American civil religion … that have long encouraged Americans to act on their understanding of the United States, acting out what they, Americans, perceive to be God’s will for their country,” said Stauffer, professor of English and African and African American studies. In the end, “The Battle Hymn” was rejected as the country’s official tune in large part because “some Southern Congressmen couldn’t accept as the official national anthem a song written by a staunch abolitionist.”

But Stauffer, who referred to “The Battle Hymn” as the nation’s unofficial anthem and praised it for its “immensely lyrical and extraordinary lyrics,” is relieved it has flown below the radar. The obligatory singing of “The Star-Spangled Banner” at any number of events, he argued, has robbed it of much of its and power and meaning.

Asked to reflect on the song’s poetry, Elisa New, Harvard’s Powell M. Cabot Professor of American Literature, said she was struck by “how visual it is: ‘Oh, say can you SEE,’ showing us the natural light, then the technological light, then the vivid spectacle of iconic visual symbols, dawn, twilight, rocket, flag.

“The poem is teaching us to look at visual symbols of the nation’s power and emergent glory — natural and man-made — and to feel confidence that that man-made is [also] natural. The flag is ‘star-spangled,’ these stylized stars connected to the stars in the sky and the fireworks of the weaponry. This is a war heaven approves, says Key.”