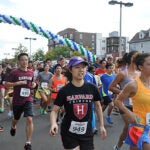 A run to remember

Armed with knowledge, Harvard’s copyright “first responders” have been sent into the fray.

The first-responders program, in its first fully operational semester, has equipped a group of Harvard librarians with the knowledge to help library users navigate the tricky field of copyright law. The program was started by Harvard’s copyright adviser, Kyle Courtney, a librarian and lawyer who works out of the Office for Scholarly Communication. Courtney advises students, staff, faculty, and many of the University’s 73 libraries on copyright issues. Over the past couple of years, he has noticed these issues growing more prevalent — and more complicated.

With his caseload increasing, Courtney said, “I started to think to myself, what if we had a uniform body of knowledge across all libraries?” So he created a tiered system of copyright experts.

“Questions that are basic can be answered on the front lines,” he said. “Then they can come up to me, and if they’re totally wild, they can go to the Office of General Counsel.” He liked the idea of librarians as first responders, because they already have in-depth knowledge of the libraries and their holdings.

“In the 21st century,” he said, “I think librarians are in the best position to own this issue.”

When Courtney introduced his idea, he got a much larger response than he expected. Harvard College Librarian Emily Bell, who was among the first trainees, said she was interested because she doesn’t think most librarians maintain the body of copyright knowledge that they need.

“Typically, we shuffle questions to people like Kyle,” she said, “but this way we are able to answer the basic questions.”

So far, Courtney has trained 14 librarians, and said he plans to train more soon in “more specialized areas.”

For now, he’s focusing on aspects of copyright that affect libraries of all types. These include fair-use laws, which allow a certain portion of copyrighted materials to be used within the protected space of the classroom. As the classroom has expanded into multimedia, Courtney said it has gotten harder to know what can be used freely, and how much of it.

“Do I have the ability to show this movie clip online? To use this licensed photo in my paper?” he said, sampling common questions. “Users get uncomfortable with making those judgment calls.”

Thanks to their training, the librarians can now give informed opinions on risk, and even give examples of court rulings in fair-use cases. Training covered other common issues, Courtney said, like ownership of E-libraries, digitization of donated collections, and library holdings as public domain.

“Just because Harvard owns a book doesn’t mean we own what’s in it,” Bell said of the public-domain issue. Training gave her“the confidence to say, ‘Absolutely, go out there and use this.’”

Courtney made sure to address issues beyond Harvard, and pulled in real-world examples.

“One day we had a huge debate over who owns that selfie Ellen [DeGeneres] sent around at the Oscars,” Bell said. “That’s an example of the mess that can be created by copyright law.”

As technology continues to develop, Courtney expects that the value of having trained copyright analysts will only increase. “Technology has changed everything about libraries, to a certain extent,” he said. “Knowledge of copyright law is becoming more necessary. This will make us more competent than we already are.”

Eventually, he hopes copyright knowledge becomes part of all librarian training. In the near future, he plans to create Web pages for Harvard that detail an “overarching library copyright policy.”

“We’re going to take this semester and see what kind of questions we’re getting, and then create those pages,” Bell explained.

Courtney said that’s just the beginning. “We expect to deal with different kinds of questions in the future,” he said. “That’s what makes this work exciting. Harvard Library is undergoing a great transformation, and this is just one part of it.”

For more information, you may also visit Harvard’s Office of the General Counsel website where you can access “Copyright and Fair Use: A Guide for the Harvard Community.”