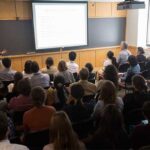 Novel approach now being tested in a clinical trial

In an advance against cancer metastasis, scientists at the Harvard-affiliated Dana-Farber Cancer Institute have shown that a specially developed compound can impede multiple myeloma in mice from spreading to the bones.

The findings, published in the Sept. 25 online edition of Cell Reports, suggest the compound may also be able to protect human patients from one of the deadliest effects of cancer.

The research involves a new approach to metastasis, the process by which cancer tumors spread to and colonize distant parts of the body. While traditionally research has focused on the cancer cells themselves, scientists are increasingly studying the interactions between tumor cells and the tissues around them — the so-called microenvironment. In the current study, researchers explored why errant myeloma cells often settle in bones, and whether the bones could be made less hospitable to such malignant homesteading.

“While cure and survival rates have increased for many types of cancers in recent decades, most of these gains have been made in patients with primary cancers — cancers that have not spread beyond their initial site,” said the study’s senior author, Irene Ghobrial of Dana-Farber’s Center for Hematologic Oncology. “Metastasis remains one of the most formidable complications we face as cancer researchers and physicians. Improvements in the treatment of metastatic cancers have, for the most part, not been nearly as dramatic as in primary disease.”

The current study focused on multiple myeloma because it is metastatic by nature. Myeloma cells originate in the bone marrow, depart for the bloodstream, and eventually return to the bones, where they form numerous colonies — hence the name.

Ghobrial and her team knew that a substance called stromal cell-derived factor-1 (SDF-1) is a kind of protein Pied Piper, attracting certain cells to new locations within the bone marrow. They found that mice with advanced stages of myeloma had sharply higher levels of SDF-1 at the sites in the bones where metastasis had occurred.

“We reasoned that by neutralizing SDF-1, we could change the bone marrow environment to make it less receptive for multiple myeloma cells, reduce myeloma cells’ affinity for the marrow, and thereby inhibit the progression of the disease,” said Aldo Roccaro, the study’s co-first author with Dana-Farber colleague Antonio Sacco.

Working with the German biotechnology company NOXXON Pharma, the researchers tested a substance called olaptesed pegol (a PEGylated mirror-image L-oligonucleotide), which binds tightly and specifically to SDF-1. Laboratory experiments suggested that olaptesed pegol blocked the activity of SDF-1, making it a less alluring signal for tumor cells. In mice, the researchers found that olaptesed pegol altered the bone marrow, rendering it uninviting to myeloma cells. The result was slower disease progression and prolonged survival of the animals.

It isn’t completely clear what becomes of the blood-borne myeloma cells that are prevented from metastasizing to the bones, the researchers said. “We know that myeloma cells can’t survive for long if they’re circulating in the blood and can’t adhere to other tissue,” Ghobrial noted. “We saw no evidence that they had metastasized and begun to grow in other tissue, either.

“Our findings clearly document a therapeutic effect of olaptesed pegol in a mouse model of advanced myeloma,” she continued. “It is now being tested in a clinical trial of multiple myeloma patients, with more trials to come.”

The research was supported by the National Cancer Institute.