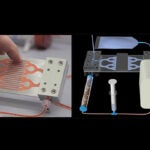 Silicon has few serious competitors as the material of choice in the electronics industry. Yet transistors, the switchable valves that control the flow of electrons in a circuit, cannot simply keep shrinking to meet the needs of powerful, compact devices; physical limitations like energy consumption and heat dissipation are too significant.

Now, using a quantum material called a correlated oxide, Harvard researchers have achieved a reversible change in electrical resistance of eight orders of magnitude, a result the researchers are calling “colossal.” In short, they have engineered this material to perform comparably with the best silicon switches.

The finding arose in what may seem an unlikely spot: a laboratory usually devoted to studying fuel cells, the kind that run on methane or hydrogen, led by Shriram Ramanathan, associate professor of materials science at the Harvard School of Engineering and Applied Sciences (SEAS). The researchers’ familiarity with thin films and ionic transport enabled them to exploit chemistry, rather than temperature, to achieve the dramatic result.

Because the correlated oxides can function equally well at room temperature or a few hundred degrees above it, it would be easy to integrate them into existing electronic devices and fabrication methods. The discovery, published in Nature Communications, therefore firmly establishes correlated oxides as promising semiconductors for future 3-D integrated circuits as well as for adaptive, tunable photonic devices.

Although electronics manufacturers continue to pack greater speed and functionality into smaller packages, the performance of silicon-based components will soon hit a wall.

“Traditional silicon transistors have fundamental scaling limitations,” says Ramanathan. “If you shrink them beyond a certain minimum feature size, they don’t quite behave as they should.”

Yet silicon transistors are hard to beat, with an on/off ratio of at least 104 required for practical use. “It’s a pretty high bar to cross,” Ramanathan explains, adding that until now, experiments using correlated oxides have produced changes of only about a factor of 10, or 100 at most, near room temperature. But Ramanathan and his team have crafted a new transistor, made primarily of an oxide called samarium nickelate, that in practical operation achieves an on/off ratio of greater than 105 — that is, comparable to state-of-the-art silicon transistors.

In future work the researchers will investigate the device’s switching dynamics and power dissipation. In the meantime, this advance represents an important proof of concept.

“Our orbital transistor could really push the frontiers of this field and say, you know what? This is a material that can challenge silicon,” Ramanathan says.

Materials scientists have been studying the family of correlated oxides for years, but the field is still in its infancy, with most research aimed at establishing the materials’ basic physical properties.

“We have just discovered how to dope these materials, which is a foundational step in the use of any semiconductor,” says Ramanathan.

Doping is the process of introducing different atoms into the crystal structure of a material, and it affects how easily electrons can move through it — that is, to what extent it resists or conducts electricity. Doping typically effects this change by increasing the number of available electrons, but this study was different. The Harvard team manipulated the band gap, the energy barrier to electron flow.

“By a certain choice of dopants — in this case, hydrogen or lithium — we can widen or narrow the band gap in this material, deterministically moving electrons in and out of their orbitals,” Ramanathan says. That’s a fundamentally different approach than is used in other semiconductors. The traditional method changes the energy level to meet the target; the new method moves the target itself.

In this orbital transistor, protons and electrons move in or out of the samarium nickelate when an electric field is applied, regardless of temperature, so the device can be operated in the same conditions as conventional electronics. It is solid-state, meaning it involves no liquids, gases, or moving mechanical parts. And, in the absence of power, the material remembers its present state — an important feature for energy efficiency.

“That’s the beauty of this work,” says Ramanathan. “It’s an exotic effect, but in principle it’s highly compatible with traditional electronic devices.”

Unlike silicon, samarium nickelate and other correlated oxides are quantum materials, meaning that quantum-mechanical interactions have a dominant influence over the material properties — and not just at small scales.

“If you have two electrons in adjacent orbitals, and the orbitals are not completely filled, in a traditional material the electrons can move from one orbital to another. But in the correlated oxides, the electrons repulse each other so much that they cannot move,” Ramanathan explains. “The occupancy of the orbitals and the ability of electrons to move in the crystal are very closely tied together — or ‘correlated.’ Fundamentally, that’s what dictates whether the material behaves as an insulator or a metal.”

Ramanathan and others at SEAS have successfully manipulated the metal-insulator transition in vanadium oxide, too. In 2012, they demonstrated a tunable device that can absorb 99.75 percent of infrared light, appearing black to infrared cameras.

“Opening and closing the band gap means you can now manipulate the ways in which electromagnetic radiation interacts with your material,” says Jian Shi, lead author of the paper in Nature Communications. He completed the research as a postdoctoral fellow in Ramanathan’s lab at Harvard SEAS and joined the faculty of Rensselaer Polytechnic Institute this fall. “Just by applying an electric field, you’re dynamically controlling how light interacts with this material.”

Further ahead, researchers at the Center for Integrated Quantum Materials, established at Harvard in 2013 through a grant from the National Science Foundation, aim to develop an entirely new class of quantum electronic devices and systems that will transform signal processing and computation.

Ramanathan compares the current state of quantum materials research to the 1950s, when transistors were newly invented and physicists were still making sense of them. “We are basically in that era for these new quantum materials,” he says. “This is an exciting time to think about establishing the basic, fundamental properties. In the coming decade or so, this could really mature into a very exciting device platform.”

You Zhou, a graduate student at Harvard SEAS, was co-lead author of the paper in Nature Communications. The research was supported by grants from the National Science Foundation and the National Academy of Sciences, as well as an NSF Faculty Early Career Development (CAREER) Award to Ramanathan.