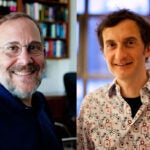 When Oprah Winfrey came to Harvard last year, the talk show host and philanthropist received not only an honorary degree of laws, but also served as Commencement speaker. Winfrey added a W.E.B. Du Bois Medal to those distinctions during a ceremony at Sanders Theatre on Tuesday night.

“Seven of this year’s recipients embody excellence in the arts, and there’s a reason we’re focused on the arts,” said Henry Louis Gates Jr., the Alphonse Fletcher University Professor.

The non-arts recipient was Rep. John Lewis of Georgia — absent from last year’s ceremony due to the government shutdown.

Yet politics and art are not so disparate, observed Gates. Throughout history, art has been a means of political expression for African-Americans.

A friend of Martin Luther King Jr. and one of the original 13 Freedom Riders, Lewis recalled that as a young boy he questioned white authority and was compelled to ignore his parents’ reprimands to just accept it, and not cause trouble.

Setting the tone for an emotional event, Lewis said: “I got in trouble. Good trouble. Necessary trouble.”

Professor of African and African American Studies in Residence Jamaica Kincaid, in praising Angelou, recited passages from her classic poem “Still I Rise.”

“Laws cannot make poets, but poets can and do make laws,” and Angelou “devoted her life to making justice as normal as oxygen,” said Kincaid.

Born in Tanzania to Ghanaian parents and raised in the United Kingdom, Adjaye is a true citizen of the world, noted Mostafavi. Among the architect’s current projects is the design of the Smithsonian National Museum of African American History and Culture in Washington, D.C.

Edgerley Family Dean of the Faculty of Arts and Sciences Michael D. Smith praised Belafonte as the artist “who introduced calypso to a broad American audience,” and one whose songs have often carried serious messages on injustice.

Belafonte spoke of the hardships of black veterans at the end of World War II. Belafonte had served in the Navy and said upon his return how “fortune fell so heavily my way” — the way it didn’t for most. That fortune was a life in the arts.

Recalling the death of Michael Brown in Ferguson, Mo., Lewis F. and Linda L. Geyser University Professor William Julius Wilson said that McQueen’s films address contemporary questions of “How does a black person move through the world when that world is predisposed to prejudice?”

“For me, art has always been about creating debate,” said McQueen, who said he wants his work to resonate with audiences, for his films to be conversations.

“The experience has to linger,” he said. “My only commitment — my only doctrine — is to not let the dust settle.”

Lawrence Bobo, the W.E.B. Du Bois Professor of the Social Sciences, introduced screenwriter and producer Rhimes, known for “Grey’s Anatomy,” the wildly popular “Scandal,” and her latest venture, “How to Get Away with Murder.”

Bobo pointed to Rhimes’ breadth in writing and her commitment to authentic characters.

“I wish it wasn’t so remarkable that I thought that television should look like the rest of the world,” said Rhimes, who was greeted by an enthusiastic “We love you, Shonda!” from a group in the audience.

“I love you, too,” she shot back, ending her remarks with, “And I’m just getting started.”

Weinstein was saluted by Diane Paulus, artistic director of the American Repertory Theater (A.R.T.), for his support and guidance of some of the most acclaimed films of the past two decades. The duo recently collaborated for the A.R.T.’s production of “Finding Neverland,” which just ended its Cambridge run and is now headed to Broadway.

Capping off the evening was Winfrey, of course.

“She is an American phenomenon,” said President Drew Faust. “Her good works are the stuff of legend at this point.”

Winfrey revealed an important lesson that came in her early days on television.

“I quickly learned that television was a platform I can use and not be used by,” she said. “I could inform people, engage them, bring little pieces of light into their lives. My constant prayer is: How can I be used? How can I use my life as an expression of art? This medal means I’m on the right path, and I thank you.”