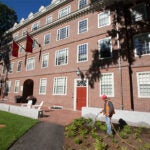 A superlative scholar, Hanan was a pioneer in the study of Chinese vernacular fiction at a time when the subject was inadequately supported by libraries in the West and considered frivolous by scholars in China. He is best known for “The Chinese Vernacular Story” (1981), and “The Invention of Li Yu” (1988), which won the Joseph Levenson Prize of the Association for Asian Studies. Both works have been translated into Chinese.

With a knowledge of Chinese vernacular fiction that spanned the 17th through 20th centuries, Hanan selected worthy works that had been neglected in the West and translated them into elegant and often witty English prose. Starting with Li Yu’s story collections and his novel, “The Carnal Prayer Mat” (1990), Hanan most recently completed “Mirage”(2014), which was published shortly after his death.

Educated in New Zealand and later at the University of London’s School of Oriental and African Studies (SOAS), Hanan first taught at SOAS and then at Stanford University before coming to Harvard University in 1968. He served with distinction as chair of the Department of East Asian Languages and Civilizations, as a member of the Board of Syndics, Harvard University Press and, from 1987 to 1995, as director of the Harvard-Yenching Institute. He helped the institute find a new course in response to a rapidly changing East Asia. He initiated the institute’s Visiting Fellows program as well as its highly regarded monograph series with Sanlian Publishing House in Beijing. He was a fellow of the American Academy of Arts and Sciences (from 1977) and honored in New Zealand with an Order of Merit for his services to higher education in 2005.

“Pat left a legacy of affection as deep and large as his scholarly legacy. His grace, unfailing kindness, and good humor endure in the memories of his colleagues and his many students,” said Harvard Professor Stephen Owen. “The Chinese had faith that the voices of the dead live on in the way they wrote; when we open Pat’s books, we still hear him.”

He is survived by his wife, Anneliese Drube, his daughter-in-law, Iris Arnold, and three grandchildren. His son, Rupert Guy, died in July 2014.

A celebration of his life and career will take place on Sept. 12 at 2:30 p.m. in the Belfer Case Study, Room S020, Harvard CGIS South, 1730 Cambridge St. A reception will follow.