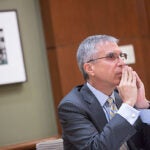 On climate, ‘do no harm’

At science and cooking lecture, chef explains process of creating the first without the second

The New York City-based chef behind the celebrated Italian eatery Del Posto wants his pasta to please everyone, including diners typically unable to consume pasta, such as people with celiac disease or gluten intolerance.

So Ladner created a gluten-free pasta with all the quality of regular pasta — most notably, he explained, “that elusive texture referred to as al dente,” the firmness that gives pasta its bite.

In a Science and Cooking lecture Monday night, Ladner discussed the inspiration behind his gluten-free pasta, saying that his primary challenge is dietary restrictions, and the fear of hurting someone with food allergies.

With the help of Carlos Rodrigues, Del Posto’s pastamaker, fresh, gluten-free pasta is formed and then put through an extrusion chamber. From there, the pasta is dehydrated to be shelf-stable, and when cooked in a microwave — yes, a microwave — al dente is achieved.

The event marked a sort of homecoming for the chef, who grew up in neighboring Belmont and said he spent his teenage years pursuing mischief in Harvard Square. Reminiscing, he gushed over the salad bar at now-defunct 33 Dunster St., current site of John Harvard’s Brewery & Alehouse. Ladner got his start in food service at a pizzeria on Church Street.

For a few days, Ladner is dishing out his pasta in Harvard Square. His food truck, Pasta Flyer, is serving gluten-free meals through Wednesday in the Science Center Plaza.

Hosted by the Harvard School of Engineering and Applied Sciences (SEAS), the public Science & Cooking lecture series runs through the end of the fall semester. The next talk will feature former White House pastry chef Bill Yosses on Sept. 29. A full schedule, including the lecture topics, is available online.