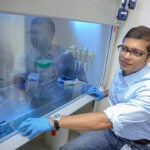 The number of parents who refuse to vaccinate their children is on the rise, and with it the incidence of preventable diseases such as measles. The health community could reverse the trend by doing a better job of initiating conversation about vaccinations, said participants in a forum at the School of Public Health (HSPH) on Monday.

Panelists at “Vaccinating Children: Public Health and Trust” called for rigorous cross-disciplinary research into vaccine hesitancy and the effectiveness of health-communication strategies. The data would be used to develop a toolkit for easing the worries of anxious parents.

????Why would anybody hesitate to vaccinate their kids?” said Barry R. Bloom, Harvard University Distinguished Service Professor and Joan L. and Julius H. Jacobson Professor of Public Health at HSPH. “Where do they get their information? How good is the information? Is it social networks? Is it over the back fence? Is it from moms at school? It’s very hard to develop a strategy if in fact we don’t know the values people are bringing when they come to the pediatrician.”

Bloom was joined by Jane Kim, an associate professor of health decision science at HSPH; Richard Malley, a senior associate physician in medicine in the Division of Infectious Diseases at Boston Children’s Hospital, a Harvard affiliate; and Seth Mnookin, associate director of the graduate program in science writing at the Massachusetts Institute of Technology. The event was moderated by Philip J. Hilts, former director of the Knight Science Journalism Fellowships at MIT.

The vast majority of parents follow the recommended vaccination schedule for their children, but the number of holdouts is significant enough to have caused outbreaks of measles, a disease that the World Health Organization declared eliminated from the United States in 2000. Between 20 and 30 percent of parents selectively vaccinate, delay some vaccines, or have some misgiving about vaccinating their children, according to a recent report from the American Academy of Arts and Sciences.

Concerns about the safety of vaccines began to bubble up nearly 20 years ago with media coverage of a study that claimed a link between autism and the measles-mumps-rubella vaccine. Doubts persisted even after the study was revealed as a fraud, in part because of misinformation spread online. Pediatricians who downplay or fail to mention the risk of adverse effects while discussing vaccinations with parents may unwittingly fuel anxiety, Malley said.

Medical professionals who acquaint themselves with parents’ cultural backgrounds and knowledge of medical issues can offer relevant and targeted information rather than a one-size-fits-all approach, the panelists said. A relatively simple way to learn views on vaccinations is to cover the topic in new-patient questionnaires, Kim noted.

Among the barriers to meaningful conversation is time. Wellness visits are on the clock, and shots are usually left until the end. Inoculating the child at the beginning of the visit would give parents and pediatrician more time to talk about the vaccinations, the panelists said. Another possible solution: wider discussion of vaccinations during prenatal visits, when parents are often more receptive to new information and have more time to develop informed decisions.

Malley suggested extending outreach beyond pediatricians by educating general practitioners on ways to reinforce accurate information about vaccinations. Bloom called for a checklist that medical office workers, school nurses, obstetricians, gynecologists, and other health professionals could consult to improve communications with parents.

Critical to developing a comprehensive communications strategy is research into why parents are anxious and how they make decisions about whether to vaccinate their children on time, on a delayed schedule, or not at all, the panelists agreed. The cost of funding such studies pales in comparison to what the public spends to contain an outbreak of disease, said Mnookin, who noted that when measles resurfaced in San Diego several years ago, the price tag was $10,000 per patient.

“We have an opportunity now to not make the mistakes we have made, and we should seize it,” he said. “We’ve seen how quickly you can have outbreaks and how expensive it can get.”

The Forum at the Harvard School of Public Health was covered via webcast.