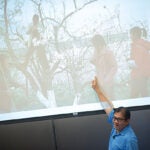 While assembly lines have been the gold standard in manufacturing for more than a century, and have put together everything from Model T’s to tablet computers, one aspect of their operation has remained constant: the need for a hand, robotic or human, to manipulate objects.

If Anand Bala Subramaniam, a postdoctoral fellow in chemistry and chemical biology, has his way, however, that could soon change.

Working in the lab of Woodford L. and Ann A. Flowers University Professor George Whitesides, Subramaniam and colleagues, including Dian Yang, Hai-Dong Yu, Alex Nemiroski, Simon Tricard, Audrey K. Ellerbee, and Siowling Soh, have developed a system for using magnetic levitation, or maglev, technology to manipulate nonmagnetic materials, potentially enabling the use of materials that are too fragile for traditional manufacturing methods. The system is described in an Aug. 25 paper published in the Proceedings of the National Academy of Sciences.

“What we’ve demonstrated in this paper is a noncontact method for manipulating objects,” Subramaniam said. “A conventional method for manufacturing is to start with simple components that are easy to manufacture, which are then assembled into more complex objects. Typically, robotic arms grasp the components and twist or turn them during the assembly process. That works very well for hard objects. But soft and sticky materials, which are of interest for building bio-mimetic objects, could easily be damaged.”

Despite its potentially high-tech applications, the system described in the paper is surprisingly simple, consisting of two permanent magnets similar to those often found on refrigerators.

“This brings the technology of maglev into the everyday use,” Subramaniam said. “We can now begin to experiment with methods to make this system more complex, with the addition of servos,” or automatic devices, “to move the magnets, or combine electromagnets with permanent magnets.”

At the heart of the system, however, is what Subramaniam calls a “paramagnetic solution,” essentially a simple mixture of water and metallic salts, in this case manganese (II) chloride.

“The physics behind how the system works is that the paramagnetic liquid wants to be closer to the magnets,” Subramaniam said. “An object that was initially at the bottom of the chamber, when placed in the device, levitates toward the center. The region closer to the magnet, which has a higher magnetic field than the center, is now filled with the paramagnetic liquid.”

What’s more, Subramaniam said, researchers found that the shape of the object, such as a screw, plays a role in determining its orientation when levitating in the device.

“What my colleagues and I found was that the screw naturally orients horizontally. But if we made it shorter by cutting the shaft, its orientation changed to vertical,” he said. “It was very striking how shape mattered in the orientation of all the objects we tested. The object orients to maximize the amount of liquid that occupies regions with a high magnetic field. Once the object is levitating and oriented, we can manipulate it without contact by using an external magnet or by rotating the maglev device.”

Going forward, Subramaniam said, researchers hope that the new system will open the door to manufacturing a host of objects using soft, fragile, or sticky materials that might otherwise be impossible to work with using traditional methods.

“Soft robots are a good example. We want to move toward softer materials that mimic the properties of biological tissues. But most methods used to assemble robots tend to damage soft materials. Assembly using maglev could be a solution,” Subramaniam said, “though there is still a lot of work to be done before we reach that level of sophistication.”