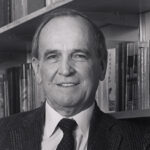 The program will provide up to five fellowships each year for outstanding individuals dedicated to future leadership in the environmental field. It will be housed within the Center for Public Leadership (CPL) at HKS in partnership with other faculty at the University, and will offer a rich array of co-curricular activities in addition to the studies by the Bacon Fellows.

“Over the past two decades, Louis Bacon has emerged as one of the most visionary and generous philanthropy conservationists in the country,” said David Gergen, Public Service Professor of Public Leadership and co-director of CPL. “Through his efforts, he has protected 210,000 acres of land from development in perpetuity, stretching from southern Colorado to eastern North Carolina and Long Island. He has been at the forefront as well in saving waterways and other precious assets. We are delighted that as a member of our Center’s Leadership Council, he has now established Harvard fellowships for future environmental leaders.”

Bacon is the founder and chief executive officer of Moore Capital Management, LP, a 25-year-old firm that invests in global financial markets and private equity, headquartered in New York with offices in London and Hong Kong.  A native of North Carolina, he earned his bachelor’s degree from Middlebury College and his M.B.A. from Columbia University. He has received numerous awards for his environmental work.

In announcing his gift to the Kennedy School, Bacon said, “As both a country and a global community, we have inherited extraordinary natural resources from those who came before us. It is crucial that we now invest in and empower the rising generation to serve as good stewards of that sacred trust.”

Donated through The Moore Charitable Foundation, the nonprofit that oversees much of Bacon’s philanthropy and conservation work, Bacon’s gift will primarily support students pursuing HKS graduate degrees, including those enrolled in HKS’s joint or concurrent degree programs with other Schools. For these graduate degree candidates, the fellowship will provide full tuition, health coverage, and a generous living stipend. In a handful of cases, the fellows selected may be doctoral or postdoctoral academic fellows who would receive funding to pursue research and teaching opportunities at HKS.

CPL, which is led by co-directors Max Bazerman and Gergenand Executive Director Patricia Bellinger, will oversee the suite of co-curricular opportunities for the Bacon Fellows, serving as a home base for the fellows on campus and welcoming them alongside nearly 70 other CPL fellows spread across seven other named fellowship programs. Close partners in this effort are several of Harvard’s foremost environmentally focused resources, including the Harvard University Center for the Environment (HUCE), led by Daniel Schrag, Sturgis Hooper Professor of Geology at Harvard University and presidential science adviser, and HKS’s Environment and Natural Resources Program, directed by Henry Lee, senior lecturer of public policy at HKS and former director of the Massachusetts State Energy Office.

“Our calling at HKS is to train exceptional public leaders to make a difference in a variety of fields,” said HKS Dean David T. Ellwood, “and Louis Bacon’s generous gift is another enormous step forward for that mission. Our shared environment grows more imperiled every day, and this program will bring to campus the kinds of emerging leaders who will serve as its most ardent and skillful stewards in the decades ahead.”

“These fellows will be able to draw on a wide array of resources here at Harvard, including perspectives and disciplines that may go beyond the areas they’ve previously focused on,” added Schrag and Lee. “We are thrilled to welcome them into our community of learning here and will do all we can to prepare them for both scholarship and action.”

“The new Louis Bacon Environmental Leadership Program is a groundbreaking initiative for the Harvard Center for Public Leadership at the Kennedy School,” said Ann Colley of the Moore Charitable Foundation. “Bringing together the brightest minds with leading experts about pressing environmental challenges will have a lasting impact. It will be exciting to follow these emerging leaders as they apply their knowledge to conservation projects around the globe.”

The first Bacon Fellowships will be awarded for the academic year 2015-16. Students who are interested must submit applications to enroll at HKS no later than Dec. 2, and then apply for the Bacon Fellowship through HKS by Feb. 26, 2015.