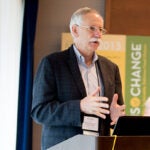 Plants or animals using color to attract a mate is fairly common in nature, but for Phlox drummondii, a wildflower commonly known as Drummond’s phlox, just the opposite is true.

The flowers, which are native to eastern and central Texas, come in two colors — purple-blue when grown alone and red when grown with sister species Phlox cuspidata. The reason for the color change, recent studies have shown, is to prevent hybridization between the two groups.

Though critically important to the evolutionary development of new species, the process of increasing reproductive isolation — which scientists call reinforcement — has remained frustratingly difficult to measure.

That could soon change, however, thanks to research led by Robin Hopkins, an assistant professor of organismic and evolutionary biology at Harvard. In a study published Aug. 21 in Current Biology online, the research team demonstrated a method for measuring the strength of selection in favor of reproductive isolation, and showed that selection in P. drummondii is very high.

“The process of evolving new reproductive isolating mechanisms to stop hybridization has been seen in all kinds of organisms, from mammals to fish and frogs and many insects, so we believe it’s a common process in the formation of new species,” Hopkins said. “The challenge has been in measuring the strength of selection in favor of those mechanisms.

The hope, Hopkins said, is that a better understanding of reinforcement will shed more light on how natural selection and other processes drive the creation of new species.

“There are two ways that natural selection plays a role in that process,” she said. “One is that as isolated populations adapt to a particular environment, they drift apart from other species, so if they do come back together, there is too much isolation, and they can’t reproduce.”

The second role, Hopkins explained, is reinforcement, in which selection itself — rather than supporting a host of traits that lead to reproductive isolation — favors isolation.

While researchers can measure the strength of selection for different traits, the same cannot be said for reinforcement.

The solution was to look for answers elsewhere.

Using an extensive sampling that covered the flower’s full range — including both color varieties — Hopkins and colleagues conducted a population genetics analysis that showed the strength of the selection for each.

“What we did was sample many populations across this color change from blue to dark red, and we were able to get an excellent look at how these phenotypes in flower color change over space,” Hopkins said. “Using that model, we were able to estimate that the strength of selection on these flower colors is very high, which was very exciting in terms of thinking about reinforcement.

“It is exciting to realize that there is at least one way that we can now have an estimate of that selection, and that in other species, if you can sample the phenotypic difference across that transition, you can use this method to estimate that selection.”