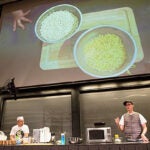 Almost every clear night, Avi Loeb, chairman of Harvard’s Astronomy Department, steps onto his porch and looks up at the Milky Way. The gleaming stars could be the lights of a giant space ship.

Back inside, Loeb tells his wife what he’s seen. She tells him it would be OK to leave with the aliens — under certain conditions.

“If there is an extraterrestrial, just make sure they leave the car keys with me,” Loeb’s wife tells him. “And don’t wake the dog in the backyard.”

Absent a late-night visit from aliens, how might we discover if the universe is teeming with life? What tools exist to help the search?

Loeb, the Frank B. Baird Jr. Professor of Science and director of the Institute for Theory and Computation, touched on those questions and others Tuesday at the Science Center during an hourlong talk titled “New Search Methods for Primitive and Intelligent Life Far from Earth.” The talk was the latest in a monthly series that connects the public with insights from scientific research. Mallinckrodt Professor of Physics Melissa Franklin served as moderator.

The question of whether we’re alone has the potential to reshape almost every facet of human knowledge, with implications in biology, history, linguistics, politics, and much more. Our religious beliefs would be challenged.

Many scientists assume that Earth is the center of the biological universe and that other galaxies are lifeless, but assumptions impede discovery, Loeb noted.

“It was once common sense that heavy objects fell faster than light ones,” he said. “We should simply check our assumptions rather than make them, especially in the search for intelligent life.”

One such assumption: that objects of the Kuiper belt, a region of the solar system beyond the orbit of Neptune, emit natural light reflected by the sun. It could be artificial light, Loeb said. A city the size of Tokyo could radiate light seen from that distance — if we looked for it, according to Loeb.

Light could be the key to detecting life beyond the solar system, Loeb said. Planets have a habitable zone: the right distance from a star to be warm enough for liquid water. Scientists using powerful telescopes should be able to view the starlight passing through a planet’s atmosphere to detect the fingerprints of oxygen and methane, Loeb said.

Such telescopes have already discovered candidates for observation. The deep-space Kepler satellite has found 3,500 objects. But Loeb said that the Hubble Space Telescope’s successor, the James Webb Space Telescope, set to be launched in 2018, will be an even more powerful investigative tool.

“If we want to detect biological molecules of life in the next decade, this is the best instrument,” he said.

There are also low-frequency observatories poised to eavesdrop on radio signals from extraterrestrial civilizations (while our signals head out into space to be captured). What would we do if we detected such a signal and made contact with a civilization billions of years older than our own?

“We could ask, ‘What is the nature of dark matter and dark energy?’” Loeb said. “But it would feel like cheating on an exam.”