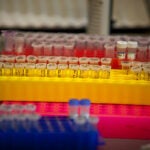 Harvard researchers have identified nine genetic variants that dramatically increase the risk of developing type 2 diabetes, adding to our knowledge of the disease’s underpinnings and providing a glimpse of its vast genetic diversity.

Amit Majithia, instructor in medicine at Harvard Medical School (HMS) and at Harvard-affiliated Massachusetts General Hospital and a researcher at the Broad Institute of MIT and Harvard, said the variants increase the risk of developing type 2 diabetes sevenfold, but are very rare in the population, found in just one in 1,000 individuals.

As significant, Majithia said, is the glimpse of genetic diversity in the single gene studied, called PPARG, which has been known to be associated with diabetes risk for 20 years.

Despite the scientific familiarity with the gene, the project’s scan of the genomes of 20,000 people from various international populations revealed 53 mutations, only four of which had been previously described. Further experimentation showed that nine of the 49 remaining mutations caused changes in key proteins that increased the risk of type 2 diabetes.

“These rare mutations are only seen in one in 1,000 individuals, but the effect on the individual is very strong because they increase risk by 700 percent,” Majithia said.

The gene, which regulates the development of fat cells, encodes a protein made up of 500 amino acids. With 19 possible amino acids that could be plugged in at each position, there are nearly 10,000 possible mutations, Majithia said, making it highly likely that there are additional mutations — possibly many of them — that affect diabetes risk.

The work, published recently in the Proceedings of the National Academy of Sciences, was conducted by a team led by Majithia and David Altshuler, HMS genetics professor and the paper’s senior author. The team included researchers from the Broad, MGH, HMS, Harvard-affiliated Beth Israel Deaconess Medical Center, and the Massachusetts Institute of Technology.

The work, Majithia said, began as an effort to understand the role the PPARG gene plays in diabetes. A mutation had been found previously that decreased the risk of type 2 diabetes by 20 percent. On the other hand, rare, familial mutations in the gene had been implicated in a severe malfunction in the development of fat cells and an increased risk of diabetes.

The work also highlighted shortcomings in emerging computer-based methods of analyzing the risk presented by genetic mutations, Majithia said. As part of the work, the researchers applied computer algorithms to the 49 new mutations they found and identified them as either benign or damaging. On investigating further, the mutations classified as damaging by the computational algorithms did not show an increased risk of type 2 diabetes.

That sent Majithia and colleagues to the lab to examine the mutations one by one, which revealed the nine harmful variants.

Majithia plans to continue work to develop methods that can reveal which mutations in PPARG are harmful, in hopes of creating a comprehensive catalog of potentially harmful mutations that clinicians can consult when patients are tested for diabetes risk.

“If there are ways to test every possible mutation up front, you can just look up the consequence of any mutation that may be found in the future,” Majithia said.