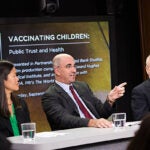 For decades, scientists studying chimpanzees in the wild have noted the ways our closest relatives are similar to humans — they form tightly knit social groups, engage in play, and use tools in their day-to-day lives.

A new study shows that chimpanzees are like humans in another important way — their natural capacity for violence.

Data collected from 18 chimpanzee research sites and four focused on bonobos show not only that the two groups are different, but that chimps engage in violent and sometimes lethal behavior regardless of human effects on local ecology. The study is described in a Sept. 18 paper in Nature.

“When all the collaborators rated each site in a systematic way according to the degree of human impact, none of those measures proved to be associated with violence,” said Richard Wrangham, the Ruth Moore Professor of Biological Anthropology and a senior author of the study. “In fact, we found that the site with the least violence had the largest human impact, and the site with the most violence was one of the least impacted. There is no overall pattern, statistically.”

The conclusion, Wrangham said, comes after several years of collecting information on virtually every incident of violence at the African research sites.

“We systematically recorded a number of years of observations — including the number of chimps in the community in a year, the rate of violence, and how confident we felt about the evidence in each case,” Wrangham said. “We categorized incidents based on whether they were observed, suspected, or inferred.”

The hope, Wrangham said, is that the study will settle the long-simmering debate about violence in chimpanzee society.

Though most researchers now accept that violence among chimps is a regular occurrence, when the first reports emerged in the early 1970s, the notion that chimps were capable of such aggression caused shockwaves in the scientific community.

To this day, Wrangham said, a small but vocal opposition has claimed that such attacks result solely from human impacts.

“This is an area where people have strong opinions,” he said. “There has been a continuing resistance to the idea that this is a natural behavior.”

If the new study is the most definitive rejection of the “human impacts” argument, is there another explanation for lethal violence in chimp society?

The theory advanced by Wrangham and colleagues, dubbed “adaptive strategies,” suggests that chimps and bonobos followed starkly different evolutionary pathways, with evolution among chimpanzees favoring the capacity to kill.

“It’s clearly in their psychology. There is something different about the way chimpanzees and bonobos approach the world,” Wrangham said. “Among chimpanzees, ultimately, this is all about males competing for access to resources, and in a number of analyses, we have found that the best predictors for violence are the number of males in the community and the population density — higher numbers of males and higher population density means it is more likely violence will erupt.”

Bonobos, meanwhile, took the opposite route, which Wrangham has described as “self-domestication.”

“This is speculative, but what I have suggested is that the absence of gorillas on the left bank of the Congo River, where bonobos live, has changed the ecology there such that bonobos are able to combine the feeding strategies of chimpanzees with the feeding strategies of gorillas,” he said. “That is a plausible explanation for the critical observation that bonobos live in more stable groups than chimpanzees do. Stable groups are associated with reduced violence. Ultimately, in stable groups victims have more defenders, so aggressors are less likely to be able to bully others without penalty.

“A fascinating clue to the evolution of bonobos comes from domesticated animals, which share a series of generally consistent characteristics,” Wrangham continued. “Compared to their wild ancestors they are more likely to have floppy ears, white patches in their coats, smaller teeth and smaller brains — there are 25 or so such traits that run across domesticated animals. The differences you see between chimps and bonobos fit into this pattern.”

In shedding light on violence among chimps, the study also may offer insight in the same tendencies in humans.

“There has been resistance to the idea that killing among chimpanzees is a natural behavior, but we are saying that it is — the ‘human impacts’ idea cannot explain it,” Wrangham said. “That conclusion raises the likelihood that we can explain human patterns of violence using some of the principles applicable to chimpanzees.”

He added: “Careful comparisons ultimately lead to the notion that natural selection has favored the propensity to kill. That’s a jarring concept, and some people want to deny the possibility. But I think we need to accept that we have inherited these propensities, and use our understanding to appreciate all the better how to make sure they do not blossom.”