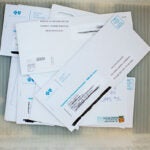 The mail and more

In 2009, Scott Benner’s life started to unravel. After 17 years as a supervisor at a steel supply company, new owners shut the business down. It was Friday, Feb. 13, recalled Benner, “just to make it a little more memorable.” His downward spiral had begun.

Two years of hunting for work and odd jobs followed. He and his wife watched as his retirement savings dwindled. Benner was diagnosed with Horner’s Syndrome, a rare condition that led to chronic, debilitating headaches. Then his wife got sick. They used the remainder of his savings to help him recover and help her through “a grueling bout with cancer and brutal treatment.”

“After that was over,” said Benner, “she and I decided to separate.”

They sold their house in June, and Benner “hit the road,” hoping for a fresh start in a different city, but the Horner’s affected his memory and he was disoriented in new surroundings. He returned to the Boston area and the comfort of a familiar setting, but “the money was running out,” he said. “I was heading into a shelter.”

That’s where he has been for the past several months, in Quincy, struggling to keep his spirits up, and spending his days in the local library with his one solace, a small sketchpad. “It’s always been a release for me,” said Benner of his talent for intricate pen-and-paper drawings. “I could escape with it.”

Soon, Benner is hoping to use his skill for more than simply forgetting his troubles. The 57-year-old is eager to sustain himself as an artist, and with the help of a Harvard graduate and residence manager at Lowell House, he can try that. Benner is part of ArtLifting, an online marketplace founded by Liz Powers ’10 and her brother Spencer that showcases artwork by men and women who are homeless, disadvantaged, or disabled.

“The No. 1 goal is to empower the artists and build self-esteem, and the second goal is to give them the opportunity to earn their own income by selling prints of their artwork in large scale,” said Liz Powers, who concentrated in sociology at the College. “That’s a lot more than standing on the street corner and maybe getting $20 from someone.”

The social enterprise, founded last year, was long in the making for the Harvard graduate, whose parents encouraged her to “try to be a positive influence on everyone around you.” While at Harvard, she volunteered to help homeless men and women secure housing, jobs, and food stamps. After graduation she used a postgraduate fellowship to blend her passions for art and helping others, creating art groups in local women’s shelters to help the residents connect.

“I thought [an art group] would be much less awkward than a stale room with people sitting on chairs, trying to pull people to start talking. But if you’re beading or painting, you just naturally start chatting.”

The project was a success, and Powers soon realized the artists needed a way to show off their “amazing artwork.” In 2011 she created City Heart, an art show in Boston’s Prudential Center that brings together roughly 70 artists from eight local homeless shelters. Still, Powers wanted more. After her brother got involved, helping with finances and logistics for the now-annual event, they brainstormed a way to “empower homeless and disabled individuals every single day of the year.”

ArtLifting launched last December and currently represents 25 artists, but the goal is to go bigger. With help from a Kickstarter campaign, Powers plans to expand to Chicago, New York, Detroit, Washington, D.C., and San Francisco, and ultimately tap into corporate America.

“Once we sign on artists from all over, we will be a national company,” said Powers, who hopes to attract real estate developers, hotel chains, and “big corporations that need art and also want to directly support disadvantaged individuals.”

Harvard’s startup community has played an important part in the project. Working with Quincy House resident Charlene Lee ’14, ArtLifting’s COO, Powers and her team connected with the i-lab’s Venture Incubation Program, where they took their project from the brainstorming phase to a full-fledged business with a five-year plan. Next they will transition to the Launch Lab, a new incubator for alumni entrepreneurs. (The i-lab works with currently enrolled Harvard students.)

For Benner, ArtLifting has meant the start of a new career with his preferred medium: pen and paper. “I love a crisp white page with black lines,” he said.

His meticulous sketches filled with repeating geometric patterns evoke the work of graphic artist M.C. Escher, one of his early inspirations. Until recently, Benner had given his drawings away to friends as presents, and received a few requests to do pictures as gifts. But he has sold close to 15 works since joining up with ArtLifting earlier this year, and he is hopeful that financial independence is just around the corner.

“This has reached the point now where I realize that I can find a market for my artwork, and I can make a living off it,” said Benner. “And it’s happening right in front of me. … When the phone rings, I know something good is going to happen when Liz is on the other end of the line.”

Connecting with ArtLifting has also been transformative for Boston resident Allen Chamberland, 49, who suffers from chronic obstructive pulmonary disease, a condition that blocks airflow to the lungs. “I can’t walk 10 or 15 feet without getting out of breath,” said Chamberland, who needs a wheelchair to get around.

Determined not to let the disease stop him, Chamberland moved to Boston from central Massachusetts in 2010 to pursue a degree in social work. But when his health deteriorated, his doctor issued an ultimatum: Stop taking classes, or receive his diploma “posthumously.”

He dropped out of school and channeled his energy into his talent with paper cutting, a delicate process of creating complex designs from single pieces of paper. Chamberland joined ArtLifting late last year. Soon, he was receiving checks in the mail. “By this time next year, I shouldn’t have to depend on Social Security to make a living,” he said.

Like Benner, Chamberland says his newfound success means more than a chance for financial independence. It also means something critical to any dedicated artist: validation.

“I still wake up surprised some mornings that this is actually working,” said Chamberland. “People like my work … And without the encouragement and opportunity provided by ArtLifting, I never would have found this out.”