A run to remember 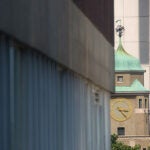 More than 600 Harvard faculty, staff, and students laced up their track shoes — or ran barefoot — to participate in the 11th annual Brian J. Honan 5K Run/Walk in Allston-Brighton on Saturday. The race has become a community event, bringing together people from both sides of the Charles River.

Proceeds raised from the 5K go to Allston Board of Trade and Brighton Board of Trade scholarships, as well as the Honan family’s charitable fund. Before the national anthem signaled the start, Boston Police Commissioner Bill Evans told the field of 1,500 runners that they made up the largest group of competitors in the race’s history.

“This race is in memory of Brian Honan, and we all had the pleasure of working with him,” Evans said. “There was no classier guy, and it’s great to keep his memory alive with this race. So on behalf of the whole Honan family, thank you for coming out.”

Honan was deeply involved in public service, sitting on the Boston City Council before entering the race for the Suffolk County District seat. He died in 2002 from complications linked to cancer surgery.

Sen. Ed Markey,who was attending the race for the first time, sounded the air horn that set the runners loose. Markey said that he and Rep. Kevin Honan, Brian Honan’s brother, have been friends for 25 years. “The Honans are a fantastic family,” Markey said. “I’m really thrilled to be here. This is a neighborhood event, and you can really feel the community come together: all races, all ages, and all political views, represented in one race.”

Kevin Honan, who represents the Allston-Brighton district, agreed that diverse community, and a powerful sense of family, were the hallmarks of the event.

“You can see so many demographics in this race: kids running with their parents, an over-80 division, and of course students from all the colleges and universities, including Harvard,” he said.

Acknowledging Harvard’s continued participation in the race, Honan, who graduated from Harvard Kennedy School in ’99 with a master’s degree in public policy, said the University was “a tremendous booster” of the annual event.

“The undergraduates and Harvard Business School really help us so much, both with funding it, and with bringing in so many runners,” he said. “The runners are extraordinary athletes, and they do a wonderful job.”

Annie Harvieux ’16 and Emily Rogers ’15 ran to experience a different neighborhood, and to mix up their athletic training.

“We’re on the Nordic Ski Team at Harvard, so we wanted to try this as a training workout, get some experience racing before the season starts,” Rogers said. “I haven’t run this course before, and it’s a great mix of participants.”

“We’re incredibly honored to be part of such tradition in the Allston-Brighton community. More than 600 runners representing Harvard are a testament to that sense of camaraderie and spirit,” said Christine Heenan, vice president of Harvard Public Affairs & Communications.  “Brian Honan was a great advocate and friend to both Harvard and the Allston-Brighton community and we are proud to continue to help recognize his extraordinary legacy of public service.”

In addition to facilitating the runners, Harvard administrators literally went the extra mile. The Harvard College Marathon Challenge, led by Craig Rodgers, continued the tradition of hosting a group run to the race from the Weld Boathouse, logging a mile and a half to the 5K starting line.

The race is a great opportunity to explore the city of Boston, get some exercise with other members of the community, and enjoy the last days of summer. Harvieux noted it had one other benefit.

“It’s a great break from studying,” she said, smiling.