A MacArthur for math professor 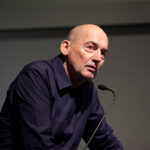 Professor of Mathematics Jacob Lurie, whose work has focused on derived algebraic geometry and who has made it applicable to related fields in new ways, has been named a MacArthur Fellow.

The MacArthur awards, often called “genius” grants, are given annually to about two dozen recipients from a variety of fields in recognition of their originality and dedication. The fellowships come with no-strings-attached grants of $625,000, which recipients may use to pursue their own creative, intellectual, and professional inclinations. Recipients are nominated anonymously, and don’t know they are under consideration until they are notified by the foundation that they have won.

“Of course it’s an honor, but I was surprised,” Lurie said in an interview today. “I didn’t even know mathematicians got them, because mathematics isn’t the kind of work in which you need money — or to travel somewhere and be there to do mathematics.”

Lurie embraces an extraordinary breadth of vision, rewriting large swaths of mathematics from a fresh point of view, while also working to apply his foundational ideas to prove important new theorems in other areas. One of Lurie’s chief areas of investigation has been the relationship between algebraic geometry and derived algebraic geometry.

“Algebraic geometry is the study of polynomial equations, and derived algebraic geometry is a variant which involves paying close attention to potential redundancy in those equations,” Lurie explained. “To take a simple example, if I told you that x equals zero, that y equals zero, and that x equals y, then traditionally you’d be happy to ignore that last piece of information. Knowing that x and y are both zero already tells you that x equals y. In the setting of derived algebraic geometry, you’d say instead that x is equal to y for two different reasons and hope to make use of that observation later on.”

In addition to his work on derived algebraic geometry, Lurie has made significant contributions to higher-category theory, topology, and geometry, and has influenced more distant fields such as representation theory and number theory. His work has redefined the foundations of homotopy theory and topological aspects of algebraic geometry, showing how many known concepts and results can be recast and improved in the framework of infinity categories.

Lurie’s work is more than just a philosophical endeavor; he includes hard theorems in his foundations, developing theory to the point that deep new results become the corollary of a general and powerful framework.

Illustrative of this is his proof of the cobordism hypothesis, a result that links purely categorical concepts of duality with the topology of manifolds and also supplies a classification of topological quantum field theories.

Lurie, who was also among the winners of the inaugural Breakthrough Prize earlier this year, said he plans to donate at least part of the prize to charity.

“One thing I would like to do is use some of the money to support the Ross Young Scholars program, which is a math summer camp for high school students,” he said. “I attended when I was a high school student, and I got a great deal out of it, so it would be nice to help them, and make sure the program stays running. The other winners of the Breakthrough Prize and I are also collaborating on an initiative to support mathematics in the developing world.”

Jacob Lurie received a B.S. (2000) from Harvard College and a Ph.D. (2004) from the Massachusetts Institute of Technology. He held a postdoctoral fellowship at Harvard University (2004­–2007) and was affiliated with the Massachusetts Institute of Technology (2007–2009) before joining the faculty of Harvard University. His work has been published in two books, “Higher Topos Theory” and “Higher Algebra,” along with subsequent papers.