A door closes, another opens 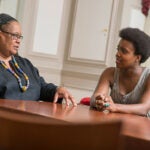 The value of mentoring

A freshman arrives at Harvard, unloads, and slips into a new life

As the back door of the van slammed shut, so did a chapter in my life. I was off to Harvard, traveling in an overfilled white cargo van, the back windows embellished with vinyl decals spelling out “VERITAS OR BUST.” I may have had a four-hour ride ahead of me from New Jersey to Massachusetts, but it represented a world of difference: a new home, new school, and new friends. As the mile markers passed, so did the final moments of my old life.

After a sleepless night at the Charles Hotel, by 6 a.m. I was dressed and ready to drive the VERITAS van to my new home, Hurlbut Hall. Even at the crack of dawn, the Yard was bustling with activity, but thankfully we bypassed the growing line of cars at Johnson Gate to park on Prescott Street. We were a mere block from the Yard, but it seemed more like a foreign land. License plates on the idling cars reflected the geographical diversity of the Class of 2018: Massachusetts, Texas, Maine, Florida, Colorado, California. My four-hour drive now seemed insignificant.

We were welcomed by a committee of energetic students to the check-in location for Union Dorms, an off-campus cluster consisting of Pennypacker, Greenough, and Hurlbut. My family waited in the van while I secured a place in the check-in line. In the first several minutes in line, I met a basketball player from Texas, an Irish national with a passion for the clarinet, and a student of economics from rural South Dakota.

My mom snapped a quick photo of me holding up my key and freshman yearbook, after which I took off running up five flights of stairs to my new room. As I turned the key in the lock and pushed the door open, I paused as if to recognize the significance of coming home for the first time. As the worn oak and wall of windows revealed themselves, sunlight poured out of the room and into the hall, swallowing me in its intensity. It was beautiful, complete with not one, but two closets — ready to receive the vanful of items that would turn the space into my room.

After hauling every box, appliance, and piece of furniture up all five flights, I set out to explore the University and meet fellow freshman. The campus was every bit as spectacular as when I left it in August 2013, after seven weeks at Harvard Summer School. It felt like the world was unfolding before me, from historic buildings that once housed Revolutionary War soldiers to the sleek Science Center. I felt tiny in front of the imposing Widener Library, like a cobblestone within the labyrinth of Harvard’s history. I was filled with pride to be part of the institution I had revered and dreamed of attending since age 4. I also admitted that my younger sister was correct in her claim that Annenberg’s Memorial Hall resembled Harry Potter’s Hogwarts!

After lunch at Pinocchio’s and a rousing speech by Dean Rakesh Khurana at the official welcome ceremony, I had one last order of business. I had to take my first walk through Johnston Gate, embracing Harvard lore dictating that a student shall pass through only twice — once on move-in day and again upon Commencement. I stood pensively outside the gate, consumed with thoughts of the great men and women who had passed before me. I passed through, almost as if my feet were floating above the asphalt. I made it.

I barely recall my return to Hurlbut to bid my parents farewell. But I will never forget the tears on my mother’s face as she hugged me goodbye, and told me to live my dream. She closed the door behind her, in almost complete silence. I went to my desk to read the note she left on a Post-it. “I love you more than words can say. Study hard, take care … and know we’re always there for you. P.S. The Gatorade is in the bottom drawer.”

That close of the door opened a new chapter in my life. As the VERITAS van drove away, I smiled, knowing I was in the ideal place to live it.

Matthew DeShaw is a freshman residing in Hurlbut Hall. He will write an occasional column about his experiences as a member of Harvard’s Class of 2018.