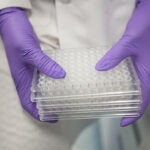 After decades on the front lines of the HIV pandemic, Max Essex has seen his share of both setbacks and victories.

There have been far too many deaths, some among colleagues in Botswana, where the Harvard AIDS researcher does much of his work. There have been frustrating years in the lab searching for a vaccine to master the disease, with nothing so far to show for it in clinics and hospital wards.

But there have also been important successes, such as the research that showed anti-retroviral drugs given to pregnant or breastfeeding women can stop HIV transmission to their babies. Today, that practice can protect more than 98 percent of such babies — better than the best vaccines.

The use of drug treatment to prevent new infections was further validated in research on so-called discordant couples, where just one partner is infected with HIV. Studies, including those conducted in part by Essex and the Harvard School of Public Health AIDS Initiative (HAI), have shown that treating the infected partner with powerful antiretroviral drugs can prevent transmission to the non-infected partner.

Those victories, and similar work by researchers around the world, have fueled the latest attempt to corral HIV. The strategy, called “treatment as prevention,” seeks to apply smaller successes to the whole population, using early, enhanced drug treatment both to treat the sick and to keep the virus at levels low enough to reduce transmission, with the hope of choking off the pandemic.

Treatment as prevention has been gaining sway in the global AIDS community in recent years. In 2011, then-Secretary of State Hillary Clinton hailed it as a possible route to “an AIDS-free generation,” and it was included in the State Department’s 2012 blueprint toward that goal. But whether it can actually work to reduce infection at the community level remains an open question.

Essex, who is the head of HAI and the Mary Woodard Lasker Professor of Health Sciences, has joined with a group of collaborators on a massive trial to test the strategy scientifically. The trial is needed to confirm that a strategy proven successful in smaller, targeted groups will work in the general population. It is also needed to provide the kind of solid scientific footing required to persuade governments to fund a major expansion of drug treatment worldwide.

The Botswana Combination Prevention Project —“Ya Tsie” in Setswana, the country’s dominant language — is an enormous undertaking. It involves partners from HSPH, the Botswana Ministry of Health, the Botswana-Harvard Partnership, and the U.S. Centers for Disease Control and Prevention, and is funded through the U.S. government’s PEPFAR program. After two years of preparation, it is in the process of enrolling more than 100,000 people, age 16 to 64, living in 30 villages across the country.

“It’s a big trial, obviously,” Essex said, “and it’s part of an approach most people recognize as important in the future, using treatment interventions as prevention.”

The trial villages are paired with control villages getting the current standard of care, though with the latest in medical record-keeping and improvements in medical equipment and supplies. The villages where treatment as prevention is being tested will receive a combination of several established strategies that researchers hope will prove more effective together than the sum of their parts. Among the strategies: in-home counseling and testing, mother-to-child interventions, and voluntary circumcision of uninfected men.

The key intervention, however, will provide anti-retroviral drugs according to two measures, rather than just the one used as the current standard. The current standard is a measure of HIV’s destruction of immune cells, called “CD4 counts,” which have become medical shorthand for measuring progression of the disease. Counts below 350 CD4 cells per microliter of blood are a common threshold — and the one used in Botswana — at which anti-retroviral therapy starts.

Essex thinks that if lowering infectivity is a key goal, then the standard should reflect infectivity, not how sick a person is. The best measure of that, he believes, is viral load, which tallies the number of copies of the virus in the bloodstream. That has direct bearing, he said, on how easy it is to infect a sex partner, and can be high even before CD4 counts fall enough to prompt government-funded antiretroviral drug therapy.

Those enrolled in the Ya Tsie trial will begin drug therapy when viral load tops 10,000 copies per milliliter of blood or when their CD4 counts drop below 350 cells per microliter.

Victor De Gruttola, the chairman of HSPH’s Biostatistics Department and the Henry Pickering Walcott Professor of Biostatistics, said faculty and students have devoted years to refining statistical methods to aid in design, monitoring, and analysis of the trial. A key element is genetic tracking of the virus in study participants, which will provide insight about the extent to which viral strains circulate within and across villages, an important consideration in evaluating the success or failure of the intervention.

“What we’d really like to know is what would happen if you rolled out the intervention to an entire sexual network,” De Gruttola said. “What we’re finding out is what actually does happen to HIV incidence in a village receiving the intervention that is surrounded by nonintervention villages. But studying viral genetic linkage provides a basis for estimating what the intervention’s effect would be if all nearby villages received the intervention.”

De Gruttola said that is just one issue that statisticians and others involved in the study design have been considering. Another is the likelihood that participation in the trial won’t be equal — some groups, particularly young men, are more difficult to enroll than others.

Data collection for the trial is expected to last four years, Essex said, followed by about a year of analysis before major findings can be released. Secondary analysis of the data will likely continue for years afterward, he said.

Essex is hopeful that treatment as prevention can provide another tool to fight the AIDS pandemic, which even with significant progress in recent years still has an enormous impact, infecting some 24 percent of adults in Botswana. He is cautious, however, about the chances for a home run against the disease.

Even if the intervention proves effective, it would still have to gain political backing to be included in government health programs, with cost a key factor — another reason Essex has decided to explore viral load as an indicator of when therapy should start, rather than just beginning therapy as soon after infection as possible, as other trials are investigating. Though the latter approach would doubtless have a dramatic effect on the disease’s spread, it would likely also be expensive enough to make rallying the necessary political support difficult. An expansion of treatment to just a subset of the population, one with a high likelihood of infecting others but not yet sick enough to qualify for drug treatment, may be more politically palatable.

“We’ve had unbelievable progress with drugs since the early to mid-’90s, both from the standpoint of saving lives of people who’ve already progressed to disease and preventing mother-to-child transmission,” Essex said. “[But] convincing everyone that they can and should [support a new intervention] from the standpoint of resources, of policy … is never easy.”