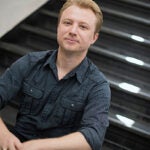 A team of engineers used little more than paper and Shrinky Dinks, the classic children’s toy that gets smaller when heated, to build a robot that assembles itself into a complex shape in four minutes flat, and then crawls away without human intervention.

The advance, described in the journal “Science,” demonstrates the potential to build, quickly and cheaply, sophisticated machines that interact with the environment, and to automate much of the design and assembly process. The method draws inspiration from self-assembly in nature, such as the way linear sequences of amino acids fold into complex proteins with sophisticated functions.

“Getting a robot to assemble itself autonomously and actually perform a function has been a milestone we’ve been chasing for many years,” said senior author Robert J. Wood, Charles River Professor of Engineering and Applied Sciences at the Harvard School of Engineering and Applied Sciences (SEAS) and a core faculty member at the Wyss Institute for Biologically Inspired Engineering at Harvard. The team included engineers and computer scientists from Harvard SEAS, the Wyss Institute, and the Massachusetts Institute of Technology (MIT).

In addition to expanding the scope of ways one can manufacture robots in general, the advance harbors potential for rather exotic applications.

“Imagine a ream of dozens of robotic satellites sandwiched together so that they could be sent up to space and then assemble themselves remotely once they get there. They could take images, collect data, and more,” said lead author Sam Felton, a doctoral student at SEAS.

The robots are the culmination of a series of advances made by the team over the last few years, including development of a printed robotic inchworm— which still required human involvement while folding itself — and a self-folding lamp that had to be turned on by a person after it assembled itself.

The new robot is the first that builds itself and performs a function without human intervention.

“Here we created a full electromechanical system that was embedded into one flat sheet,” Felton said. The team used computer-design tools to inform the optimal design and fold pattern. After about 40 prototypes, Felton honed in on one that could fold itself up and walk away. He fabricated the sheet using a solid ink printer, a laser machine, and his hands.

The refined design took only about two hours to assemble using a method that relies on the power of origami, the ancient Japanese art whereby a single sheet of paper can be folded into complex structures. The origami-inspired approach enabled the team to avoid the traditional “nuts and bolts” approach to assembling complex machines.

The team started with a flat sheet, to which it added two motors, two batteries, and a microcontroller, which acts like the robot’s brain, Felton said. The sheet was a composite of paper and Shrinky Dinks, also called polystyrene, and a flexible circuit board in the middle. It also included hinges that were programmed to fold at specific angles. Each hinge contained embedded circuits that produce heat on command from the microcontroller. The heat triggers the composite to fold itself in a series of steps.

When the hinges cool after about four minutes, the polystyrene hardens, making the robot stiff, and the microcontroller then signals the robot to crawl away at a speed of about one-tenth of a mile per hour. The entire event consumed roughly the amount of energy in one AA alkaline battery.

The robot operates on a timer, waiting about 10 seconds after the batteries are installed to begin folding. However, “We could easily modify this such that the folding is triggered by an environmental sensor, such as temperature or pressure,” Felton said.

One of the primary challenges in the process, Felton said, was the propensity for the robots to burn up before they folded properly; each one runs on about 10 times the current that typically runs through a light bulb.

“There is a great deal that we can improve based on this foundational step,” said Felton, who plans to experiment with different kinds of shape-memory polymers that are stronger and require less heat to activate, for example.

The method is complementary to 3D printing, which also holds great promise for quickly and inexpensively manufacturing robotic components but struggles to integrate the electrical components and, in this case, would have taken a lot longer to produce the functional prototype.

The long-term dream of this work, Wood said, is to have a facility that everyone could access around the clock in their community when they might have a need for robotic assistance, from everyday house and porch sweeping to detecting gas leaks in the neighborhood.

“You would be able to come in, describe what you need in fairly basic terms, and come back an hour later to get your robotic helper,” Wood said. All told, each robot cost about $100, but only $20 for the body without the motors, batteries, and microcontroller.

“This achievement by Rob and his team changes the way we think about manufacturing, in that the machine fabricates itself,” said Don Ingber, founding director of the Wyss Institute, Judah Folkman Professor of Vascular Biology at Harvard Medical School, and professor of bioengineering at Harvard SEAS. “The days of big, rigid, robots that sit in place and carry out the same repetitive task day in and out are fading fast.”

This work was funded by the National Science Foundation, the Wyss Institute for Biologically Inspired Engineering at Harvard University, and the Air Force Office of Scientific Research through a National Defense Science and Engineering Graduate Fellowship.