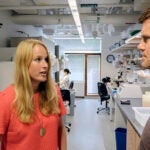 Film editors play a critical role by helping shape raw footage into a narrative. Part of the challenge is that their work can have a profound impact on the finished product — with just a few cuts in the wrong places, comedy can become tragedy, or vice versa.

A similar process, “alternative splicing,” is at work inside the bodies of billions of creatures — including humans. Just as a film editor can change the story with a few cuts, alternative splicing allows cells to stitch genetic information into different formations, enabling a single gene to produce up to thousands of different proteins.

Harvard scientists say they’ve now been able to observe that process within the nervous system of a living creature.

Using genetic tools to implant genes that produce fluorescent proteins in the DNA of transparent C. elegans worms, John Calarco, a Bauer Fellow at the Faculty of Arts and Sciences Center for Systems Biology, and postdoctoral researcher Adam Norris were able to gather hard evidence that the alternative splicing process frequently works differently in different types of neurons.The study was described in a recent paper in Molecular Cell.

“Splicing is an essential process in gene regulation that happens in most eukaryotic cells, all the time,” Calarco said. “It’s a fundamental part of how eukaryotic genes produce proteins, but when it goes wrong, it can lead to any number of diseases, including in the nervous system.”

On the surface, Calarco said, the splicing process is relatively simple. To manufacture a particular protein, DNA is first transcribed into messenger RNA (mRNA). But while that transcription contains the instructions to code for a protein, it also contains noncoding segments. Once those segments are removed, the remaining genetic information must be stitched back together, with different combinations producing different proteins.

Science had long understood how the process generally works. One question that remained was whether closely related cell types frequently used the process to produce distinct proteins from the same genetic building blocks.

“We were interested in looking at how splicing might be different in one type of neuron versus a different type of neuron,” said Norris. “We didn’t know whether that was often going to be true going in, so we were looking for indicators that that might be happening.”

What they found was clear — different cells splice the same genes in different ways. The process can be visualized in real time using a fluorescent protein-based approach.

“What we’ve been able to do is visualize the alternative splicing process in these animals in single neurons,” he said. “We engineered fluorescent proteins in such a way that they can provide an indication of how the RNA is being differentially spliced. If a particular coding segment is present, the protein will glow red, and if it’s removed, it will glow green.”

When Calarco and Norris used the fluorescent protein to target two types of motor neurons in the worms, they immediately saw a distinctive fluorescent pattern emerge, meaning the two classes of neurons were splicing mRNAs differently.

In additional experiments that targeted other genes, Calarco and Norris were able to identify unique patterns of splicing, suggesting that the process is different not only among different neuron types, but also among different genes.

“What this suggests is that this process is happening pretty frequently, and is very complex, even in an animal — like C. elegans — that has just 302 neurons,” Calarco said. “That’s why we believe it has a potentially large impact on understanding our own nervous system, which is immensely more complex.”

By better understanding how the splicing process works in different neurons, Calarco said, scientists might uncover insights on how it can go awry and lead to disorders such as epilepsy.

Ultimately, alternative splicing appears to play a critical role in allowing organisms to evolve greater complexity without the need for ever-larger genomes.

“There are a finite number of genes in the genome, and changing which of those gets turned on or off gives you a certain level of complexity,” Calarco said. “What alternative splicing does is add another layer of complexity, allowing an organism to diversify a cell type even more — we think this contributes a great deal to an organism’s ability to diversify its cellular function and cellular architecture.”

“We know the human nervous system is very complex,” said Norris. “I think this is one explanation for how that complexity is encoded. We’ve got on the order of billions of neurons, but we’ve only got on the order of thousands of genes. How can you create a complex, billion-neuron network with different capacities for each cell? This gives us one explanation for how an organism can do that.”

The study was performed in collaboration with Mei Zhen, a professor at the University of Toronto and a recent Radcliffe Fellow, and Shangbang Gao of the Lunenfeld-Tanenbaum Research Institute in Toronto.