‘It was sort of a eureka moment’ 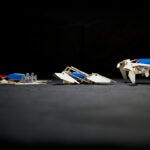 A team of engineers and computer scientists have unveiled the latest robotic and materials marvel: a flat sheet that folds itself into a robot that then walks away.

The Gazette spoke with Wood late Thursday about the self-made robot, the broader industrial implications to the project, its potential practical applications, and what might be coming next.

GAZETTE: Can you describe the advance? What is unique about this particular kind of robot?

WOOD: Well, it’s not necessarily the robot that is unique. The robot is meant to embody some of the key findings we’ve had in this general body of work.

We investigated cheap, fast, and easy ways of being able to build machines and robots based on folding. We worked with our collaborators at MIT, who broke that down into a number of key features that are basically different ways to fold things. They can prove, algorithmically, that you can combine them in different ways to make anything, any sort of complex structure, any complex mechanism that you want. All through folding. So the robot itself is just an embodiment of those things.

GAZETTE: So the folding is really just a manufacturing process that could be applicable in a broad array of settings?

WOOD: That’s sort of our underlying, big-picture goal, to make a very accessible, highly functional manufacturing process based on these folding techniques.

GAZETTE: About the robot itself, what can it do, and why is it a good thing to use to illustrate this process?

WOOD: Well, robots in general are complex mechanisms: They have articulation, some number of degrees of freedom, they must interact with the world. So we picked a robot not just because we work on robotics, but because they are traditionally difficult to make and control. In this case, it is just a four-legged robot whose body and mechanisms are assembled through this folding process.

GAZETTE: What does it do?

WOOD: Upon self-assembly, it just turns itself on and walks away.

WOOD: Well, that’s been a goal, I guess, because of the dramatic nature of it. Imagine printing something that then walks away.

GAZETTE: Is 3-D printing involved in the process?

WOOD: It has some analogies to 3-D printing in the sense that you’re building up a structure layer by layer, but it’s not. It’s folding. We use printing more as a metaphor because the processes are just like standard paper printing. We want to make something that is accessible, cheap, and ubiquitous. We want to use inexpensive tools to make the process itself more accessible.

GAZETTE: What is it printed on?

WOOD: It’s printed on a composite material that’s made of multiple layers — polymers, paper, flexible circuit layers — that are stacked into a quasi-2-D composite that folds itself. The folding is induced by the materials in the composite, and the sequence in which you activate the materials is controlled by an on-board microcontroller. In this case the self-folding is thermally induced. It’s a polymer which just so happens to be the thing that Shrinky Dinks are made of.

GAZETTE: Is it the actual Shrinky Dink material, or is it just something chemically similar?

WOOD: It’s called prestretched polystyrene, which I believe is exactly what Shrinky Dinks is.

GAZETTE: Are there possible applications for this now?

WOOD: We’re thinking about applications in two classes. The first class is when you might need deployability, in terms of logistics or applications like space exploration or going into hazardous environments or confined environments — places where you’d actually need things to be shipped in small volumes and then sort of fold themselves up to assemble. But the broader implications come in thinking about this as just another tool to make manufacturing of complex electromechanical devices easier and more accessible.

GAZETTE: Have you had any interest from industry?

WOOD: No, we only just filed for patent protection on it today, literally, before it came out, so we’re looking into that.

GAZETTE: How important is cost? Is doing things cheaper and easier important here?

WOOD: Absolutely. Think about robotics. They’re typically quite expensive and difficult to make. So this is really democratizing the access that people can have toward, not just robotics, but any complex electromechanical device. It’s not going to solve everything. But it is another tool — that happens to be cheap and relatively easy — to make it more accessible. So for educational purposes, custom robots for your home, personalized medical devices, whatever it would be, they would inherently be cheaper made this way as opposed to through some highly specialized manufacturing methods.

GAZETTE: What was everyone’s reaction in the lab when it finally came together?

WOOD: It was sort of a eureka moment, in the sense that the dramatic moment of the robot walking away is something that we’ve been dreaming about for a while. We were very excited about it, obviously, but we’re also in the mode where we’re saying, “Wow, this is really cool, what else can we do with it?” This is probably not the most complicated thing that we could make. We’re in the mode of exploring the other options for stuff we could make.

GAZETTE: What comes next?

WOOD: Multiple things, many in terms of scale, both large and small, trying to make the process create smaller devices, perhaps more akin to the some of things my lab has worked on in the past. Larger and perhaps more functional load-bearing structures can be made in this way, perhaps things like shelters or Ikea-style furniture, that kind of thing. [We can look at] expanding the scope of materials that are used. And I think, perhaps most importantly, what comes next is more automation in terms of design. If we want them to be accessible and usable and people making things with this, we don’t want it to be just engineers [using the process]. We want it to be anybody, and so there would have to be some way to translate the desired function into form. Describing function from form is one thing, but inverting that and describing form from function is a very nontrivial thing, and also part of the big-picture project that we’re collaborating with MIT and the University of Pennsylvania on.