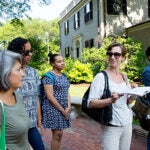 Former Harvard Board of Overseers and Corporation member Hugh Calkins ’45, J.D. ’49, died at his home in Cleveland Heights, Ohio, on Aug, 4.

Calkins served on Harvard’s Board of Overseers from 1966 to 1968 and was a member of the Harvard Corporation from 1968 to 1985. Then-President Derek Bok awarded him an honorary doctor of laws degree in 1986 in recognition and appreciation of his two decades of service to the University.

Henry Rosovsky, who succeeded Calkins on the Corporation, believes Calkins deserves credit for helping create a more open atmosphere for the Corporation across the University.

“Hugh was on the Corporation during a very difficult time at Harvard: the 1960s. He was unique in that he extended himself to everyone and spent time with students, as a result of which he made the Corporation and other governing boards more visible. Considering Harvard’s traditions at the time, that was a tremendous service and one of his main achievements.”

Born in Newton, Mass., Calkins’ undergraduate years at Harvard were interrupted by service in the Air Force during World War II. He later attended Harvard Law School and was president of the Harvard Law Review.

Following graduation he clerked for Justice Learned Hand of the New York Circuit Court and Justice Felix Frankfurter of the U.S. Supreme Court before joining the Cleveland firm of Jones, Day, where he ultimately became senior partner and head of the firm’s tax division. Calkins was active in national legal circles throughout his career, most notably serving as deputy director of President Eisenhower’s Commission on National Goals.

Calkins’ experience on the Goals Commission launched his longtime commitment to, and eventual second career in, education. He returned to Cleveland to found Plan for Action by Citizens for Education (PACE) and served on the Cleveland Board of Education from 1965 to 1969.

Following his retirement from Jones, Day, Calkins earned a teaching certificate and devoted several years to teaching in inner-city schools in Cleveland. He also managed Initiatives in Urban Education (IUE), a foundation organized for Calkins by his children that is dedicated to improving student achievement outcomes in Cleveland public schools. In that role, Calkins was instrumental in helping found Citizens Academy, a charter school near University Circle that has since gained recognition as one of the state’s highest-achieving charter schools.

A September memorial service will be held in Ohio. Remembrances of Hugh Calkins may be shared at http://hughcalkinsremembrances.wordpress.com/about/.