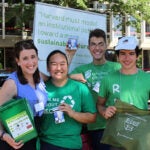 Composting program grows in the Yard

Emotions range from joy to wistfulness as students part with families

Michelle Friesen remembers being a college freshman, setting off from Idaho to Long Island University years ago. “It was great, I was so excited,” she recalled, with a wisp of wistfulness.

Friesen is in Cambridge this week to settle in her daughter, Nikki, a Harvard freshman. The elder’s parting words of wisdom went something like, “Do you really need that many shoes?”

While some parents did weep their way through Monday’s move-in, even Nikki agreed that her mother was eerily calm. “But that’s because I moved out once before, when I was 14,” she said.

“She went to Colorado, to live with a host family while she played ice hockey,” said Michelle Friesen. “So it’s a lot easier this time, and she’s ready to be a freshman.”

Ice hockey wasn’t too popular in the Friesens’ hometown of Corvalis, Ore. But while in Colorado, Nikki honed the skills she’ll be using on Harvard’s women’s ice hockey team once its season kicks off in October. Mother and daughter most likely won’t reunite until Christmas.

“I just told her to get to know lots of different people and to have fun with the hockey team,” said Friesen.

Laquetta Prince, however, was upset at saying goodbye, even though she too had done it before. Her youngest daughter, Ashley, graduated from Harvard in 2011, and now Shannon, her oldest, is entering Harvard Law School as a joint degree Ph.D./J.D. student.

“Even though I’m sad that she’s away from home, I’m excited about the opportunities she has. She’s pursuing her dreams,” said Prince, who returns home to Houston tomorrow.

If she could turn back the clock to do it all over, she wouldn’t change a thing, Prince said. She met her husband at the University of Houston, and life has been good.

“My husband and I have been so invested in our two daughters, and we promised them whatever school they got into we’d make sure they could attend,” she said. “Investing in our children is the best investment we could ever make.”

Karina Hunter also saw off her son, Tucker, at the Law School.

“He’s my youngest. My other two kids have worked at refugee camps. They’ve worked all over the world. So I just assumed he’d be fine, but my daughter told me, ‘You do realize he’s the youngest one and he’s never left,’ ” said the interior designer from Muskoka, Ont. “He went to college at home, so he is, in my heart, a freshman because he’s never left home.”

Calling Tucker mature and self-assured, Hunter admitted that separation anxiety had left her a wreck, and tonight a big, fancy goodbye dinner is in the works. “She’s cried several times,” said her husband, Steve Jackson.

“But I’m so excited for him. I think Harvard is a wonderful and life-changing opportunity. I’ve cried from the very first day Tucker was admitted,” Hunter said. “Tears of joy!”

That 10-hour drive back to Muskoka will be an emotional ride, she admitted.