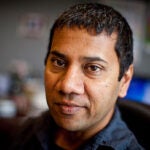 In Sierra Leone, shortage of gear to protect health workers from Ebola has closed many clinics

Harvard-affiliated physicians expect one deadly side effect of the West African Ebola outbreak will be a surge in deaths from non-Ebola causes due to the widespread shutdown of health clinics in affected countries.

Mohamed Bailor Barrie, a Fulbright Fellow at Harvard Medical School (HMS) and a physician working in Sierra Leone’s Kono Province, said that a severe shortage of protective gear to insulate health workers from the virus has forced many clinics to close just as they’re needed most. Even those clinics that remain open are seeing light traffic, largely due to fear of the disease and of harsh quarantine measures being employed, Barrie said.

The Wellbody Alliance clinic he founded, for example, normally sees 120 patients a day. Fears related to Ebola, however, have cut traffic to just 10 to 12 patients daily as people turn to traditional healers or treat themselves with over-the-counter medications. Unfortunately, that means people aren’t getting treatment for other potentially deadly ailments. Ebola’s presence doesn’t mean malaria, tuberculosis, HIV, or any of the other ills that afflict people in the region have lessened.

“Most of the private clinics are shutting down. Now people are not only dying from Ebola, they are dying from other diseases that could be treated if you go to facilities, like hypertension, diabetes, malaria,” Barrie said.

The concerns of Barrie, who spoke en route from Sierra Leone to HMS to resume his fellowship work, were echoed at the Radcliffe Institute on Thursday by Hilarie Cranmer, assistant professor at HMS and Harvard School of Public Health (HSPH) and director of disaster response for Harvard-affiliated Massachusetts General Hospital’s Center for Global Health. Cranmer, an affiliated faculty member with the Harvard Humanitarian Initiative (HHI), said the lack of proper equipment to handle the Ebola virus extends not just to the clinics, but also to the labs that handle and test blood of possible victims.

“This will have excessive mortality consequences in the next few months to years,” Cranmer said. “No Caesarean sections, no pediatric care, no vaccination strategies. All these things are affected because hospitals are closed in these countries.”

Cranmer was at Radcliffe’s Fay House Thursday for a round-table discussion among Harvard-affiliated physicians, disaster experts, and ambassadors and other officials from the West African nations of Sierra Leone, Guinea, Liberia, Nigeria, Gambia, and Burkina Faso, as well as from Gabon in Central Africa and Zambia in South Africa.

The four-hour session, organized by HHI, allowed officials to ask questions of medical experts, exchange views about strategies to ease the crisis, and discuss potential ways to help in the future, according to Gregory Ciottone, director of the Disaster Medicine Fellowship at Harvard-affiliated Beth Israel Deaconess Medical Center, associate professor at HMS, and an HHI-affiliated faculty member.

“This is a scary outbreak, it really is,” Ciottone said, adding that prior Ebola outbreaks were relatively small because they were identified early and managed with effective quarantines. “How long is it going to be? There’s no way to predict. It’s going to be a very, very difficult thing to deal with.”

Mustapha Fofana, director of medical engineering and technology for Beth Israel’s Fellowship in Disaster Medicine, is originally from Sierra Leone and helped put together the session.

“They are overwhelmed,” Fofana said of the West African officials.

HHI Director Michael VanRooyen, vice chairman of the Department of Emergency Medicine at Harvard-affiliated Brigham and Women’s Hospital and professor at HMS and HSPH, said Thursday’s round table was designed to give ambassadors and other officials, who have been bombarded with information and queries, a chance to turn things around and ask questions of their own.

The session, which may be repeated if deemed necessary, is a way Harvard can help by keeping needed information flowing during the crisis, VanRooyen said.

Aside from gear to protect health care workers and get clinics and hospitals open again, information and education are the biggest needs in Sierra Leone, Barrie said. Communities can be educated most effectively by local health workers who understand customs and languages, and who are trained to keep people healthy. A priority, he said, should be to identify those workers, provide training, and get them into villages.

“I feel like the international community should really put more emphasis on providing the right protective gear for the country and help support … community-based interventions and educate people more,” Barrie said, adding that experimental drugs such as ZMap are of limited large-scale use. “ZMap is great, but we don’t have enough doses in the world, so precaution and protective measures that control the spread are the ideal things to do.”

Barrie, through the Wellbody Alliance, a health clinic he co-founded in Kono District, has already begun working to improve education, particularly as it relates to quarantine. Major obstacles in managing the epidemic include stigma and fear, which partly stem from the harsh quarantine tactics used by the government, enforced by police or soldiers, that sometimes cause people to flee.

Kono District’s first Ebola case was identified on July 29. A woman who had traveled to parts of the country where the virus is widespread became ill with fever and joint pain and went to a local clinic, Barrie said. On seeing the symptoms and the woman’s travel history, clinicians called the police, which caused her to run away. She died a week later. Afterward, her sister, husband, and son developed symptoms. They went to a government hospital, and when physicians decided to quarantine them, the husband and son ran away, crossing the border to Guinea, Barrie said.

Public health officials traced the woman’s contacts and decided to quarantine 36 people in two houses. Police showed up at 2 a.m. and announced that nobody could leave. Nonetheless, Barrie said, a handful fled.

At this point, Barrie said, the Wellbody Alliance sent in trained community health workers to explain what quarantine is, why it is needed, and how long it should last. After talking to the health workers, Barrie said, people stayed in the houses for the quarantine period. Two developed suspect symptoms, were tested, and the results came back negative. That type of approach should be replicated, Barrie said, even for the broader district-level quarantines, in which police and the military have blocked entry points to infected areas, although a number of people have escaped.

Barrie spoke by phone from Senegal, where he is spending a few days before continuing on to Cambridge to resume his studies, accompanied by his wife and three children. Barrie’s thoughts, though, remain on Sierra Leone and the Ebola epidemic, which may be a focus for his thesis research.

Scheduled to graduate in June 2015 with a master’s of medical sciences, his original thesis research was sidetracked by the epidemic. Last year, the first of his two-year fellowship, he began working on a project to improve the treatment of tuberculosis by creating a mentoring program to improve the effectiveness of health worker training. When he returned to Sierra Leone last spring, it quickly became clear that the disarray in the health care system and the closing of clinics due to Ebola made his TB work impossible.

He is considering developing a training program for community health workers that would let them educate the local people about Ebola, with particular emphasis on safe ways for family members to help the sick, since they are often the primary caregivers of Ebola patients and are most susceptible to infection.

That training, and the community education it fosters, can help people manage the fear that is widespread now.

“Initially there was a huge level of denial from the general populace,” Barrie said. “But now that is changing. People have started believing that Ebola is real … But I think they are still scared. People are scared to go to hospitals.”