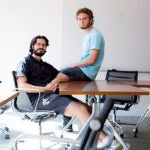 Beetle a cause for concern — not alarm — at Arboretum

Officials at Harvard’s Arnold Arboretum recently announced that the emerald ash borer had arrived in Boston.

The bright-green beetle — its scientific name is Agrilus planipennis Fairmaire — is three-eighths of an inch long. It is thought to have hitchhiked a ride to the U.S. Midwest sometime in the 1990s, but wasn’t discovered until 2002, in dead ash trees near Detroit. Since then it has spread east, arriving in western Massachusetts two years ago.

The Gazette spoke with Andrew Gapinski, manager of horticulture at the Arboretum, and Michael Dosmann, curator of living collections, about how the beetle might affect the park’s 175 ash trees as well as forests nearby.

GAZETTE: What happened at the Arboretum last month?

GAPINSKI: A single adult beetle was found in one of our monitoring traps at the Arboretum. The traps are part of a partnership between the Arboretum and the DCR [Massachusetts Department of Conservation and Recreation], which sets up these traps statewide. We’ve been working with DCR for the last three or so years, knowing that the EAB was headed our way.

John DelRosso, our head arborist, was leading a group of summer interns here through the Fraxinus [ash] collection, and one of the interns spotted this suspicious-looking beetle in the trap. We immediately called the DCR and they stopped by the next day. Though they had a suspicion what it was, they sent it to USDA-APHIS [U.S. Department of Agriculture/Animal and Plant Health Inspection Service] for confirmation. We heard back a day later that it was in fact the first emerald ash borer to be found in Boston.

GAZETTE: What is an emerald ash borer, and why is it so bad?

GAPINSKI: The emerald ash borer is a beetle that’s native to Asia and specifically northern China, eastern Russia, and the Korean peninsula. In 2001, there was suspicious ash decline in the Detroit area that was overlooked as ash yellows, a disease we see in ash all the time. In 2002 they reared some insects from these dying ash trees and found this beetle they couldn’t identify. In 2003 it was finally identified as what we know today as the emerald ash borer.

It was thought to have been introduced to North America through wood-packing material, like crates, from China. Based on forensic evidence, it was probably in the U.S. in the early 1990s, allowing the population to build to the point where they actually started to [cause] significant ash decline and death, because it takes several years for the insect to kill the tree.

GAZETTE: How did it get from Michigan to here?

GAPINSKI: If you look at a map of the spread of the emerald ash borer, Michigan is the epicenter of the introduction, it radiates to Ohio and Indiana, which are pretty much infested, as well as a good portion of Illinois, Pennsylvania, and West Virginia. It’s now turning up more and more in New York, Wisconsin, Iowa, Missouri, Tennessee, and other states on the edge — including the New England states.

If you look on the periphery, particularly in the earlier stages of the infestation, there’s these “wildfire” spots, where it jumps from the moving edge or front of the range, to a point hundreds of miles away. Most of these events are thought to be from people transporting firewood from an infested area to a noninfested one. So somebody in Wisconsin is headed to Minnesota and they bring firewood with them and enter a state park. The firewood happens to be ash and they end up spreading the insect.

The original spread of the insect from its introductory point in Michigan is also thought to have been spread by nursery material — ash trees growing in nurseries that are sold to Ohio and so on. So early on, before they knew what they had on their hands, they were probably transporting the insect around via that nursery material. This is no longer the case due to quarantines within counties and states.

GAZETTE: How important is the ash tree, both in forests here and in landscapes?

DOSMANN: Ash is a very significant genus of trees in North America. We have about 16 species of native ash, none of which have shown any clear resistance to emerald ash borer. In the Midwest, you might have pockets of forest that contain a canopy of up to 35 percent ash, which can be quite devastating to an ecosystem when they are killed. … In New England it is far less dominant. As far as a street tree goes, ash was highly planted following the decline of American elm in the middle of the 20th century, which was devastated by another invasive pest known as Dutch elm disease. If you go to Minnesota you can find communities that have 65 percent ash planted as their street trees. So in those situations certainly, the effects both to the natural and urban ecosystems can be devastating. The costs of removal — running into the millions — can nearly bankrupt a municipality.

GAZETTE: The forests here have a lower proportion of ash?

DOSMANN: Ash is less common in Massachusetts’ natural areas, particularly in the eastern half of the commonwealth. In the Boston area, there is not a lot of naturally occurring ash. As far as our street trees go, [ash makes up] 6 percent of Boston’s urban tree canopy; nearby cities like Cambridge or Brookline will be similar. Although any loss of a species to an environment is significant, the impact in the Boston area is going to be much less than we’ve seen in the Midwest because of the lower representation of ash, both in the wild and urban landscape. A few years ago, I collaborated with USDA to survey and collect seed from ash populations in New York and Pennsylvania, where ash is much more abundant, in advance of EAB. The goal was to get the seed in long-term storage, to rescue these populations and potentially reintroduce them in decades to come if the insect can be brought under control.

GAZETTE: What does the presence of a single beetle at the Arboretum mean about the forests and trees surrounding the Arboretum? Does that mean this is possibly not a problem and controllable? Or does it mean it’s probably pretty widely spread outside the Arboretum?

GAPINSKI: The Arboretum was the first to detect emerald ash borer in Boston, but that doesn’t mean that’s the first beetle in Boston, I think that’s clear.

We actually feel good about us finding it first, because it means we’re doing the right things. We take a proactive approach to vigorously monitor these high-risk, high-consequence pests that invade in our collections and our communities. The collaborative deployment of our traps with DCR paid off. My guess would be that there’s emerald ash borer in other places in Boston, but they are just undetected. It’s highly unlikely that this one beetle landed on this one trap in the Arboretum and it’s the first occurrence.

GAZETTE: What are the implications within the Arboretum? How many trees are in the ash collection and are they doomed, or is it controllable?

DOSMANN: Responsible stewardship of the Arboretum’s living collection of temperate trees and shrubs integrates prioritization with management or treatment options. Of the 15,000 plants in our living collection, ash makes up just about 175 individual trees, 30 of which are young plants in our nursery. So, compared to our maple or our crabapple collections, it’s relatively minor, representing about 1 percent of our total. However, when you look at many of the individuals’ provenance and other documentation, there are a number of important specimens — even a few centenarians collected over 100 years ago in Asia — that are a priority and ones we want to preserve.

Of those 175 individual trees, we’ve deemed about half to be of sufficient significance to either treat or deploy other management tactics in order to protect and preserve that lineage from EAB threat.

EAB is a very treatable pest. There are certain chemical treatments that have been proven to be very effective means of control for at least two years, maybe more, on a single application. So when you talk about cost effectiveness for a high value specimen, that’s worth doing for us.

GAZETTE: And you’re confident you can do that?

GAZETTE: What makes one ash tree more valuable than another ash?

DOSMANN: Like other museums, the Arboretum assesses a tree’s value based upon its documentation. For example, an ash tree that was purchased from a nursery down the street will have a far different level of documentation compared to one that was collected from a wild population, where the “passport data” are far more robust and useful for purposes of scholarship and conservation. Furthermore, as an individual tree in the Arboretum serves a research purpose, it can accumulate additional value. Perhaps a scientist made a discovery on a particular specimen — regardless of its provenance. We take those types of things into account as well. Lastly, let us not forget that some individual trees just happen to be beauties and magnificent representations of their kind. Such a specimen can hold keen and clear aesthetic value that warrants its preservation.

GAZETTE: Does this mean that the ash borer is now resident and will be in the Arboretum except for the trees you decide to treat? Or is it possible to eradicate it, as was done with the Asian longhorned beetle in the Boston area?

GAPINSKI: A clear distinction to be made here is the difference between Asian longhorned beetle and emerald ash borer. The Asian longhorned beetle has popped up in a number of states. It was first found in New York City in 1996 and since has been in Chicago, Ohio, and New Jersey, and locally in Worcester and Boston. Those “spot fires” have been under eradication programs, some of which have been very successful, such as the one in Boston. Emerald ash borer is not the same because it wasn’t identified in time. Although early eradication efforts were made for EAB, those initiatives soon focused on simply slowing the spread of the pest, which continues today.

It’s just going to be one of those invasive, nonnative pests that we manage in our landscapes, like hemlock woolly adelgid, which has devastated hemlock populations in the eastern U.S., Dutch elm disease, winter moth — these are all Asian-introduced species that affect our tree canopy. This just gets added to that management list.

In light of pest introductions like the emerald ash borer and Asian longhorned beetle, both of which were brought to North America in wood-packing material, there was an international treaty put in place in the mid-2000s that mandated that all of these wood shipping crates be heat treated before transport. Although it’s too late for emerald ash borer and Asian longhorned beetle, hopefully those regulations reduce the spread of these exotic pests for the future. Because certainly there’s more out there.

GAZETTE: Any advice for landowners in the Boston area?

GAPINSKI: If I were a landowner, I would be looking at my property to see if I had ash trees, certainly, and keep an eye out for signs of infestation. The first indication is dieback in the canopy, the highest branches. Usually the insect is going to start out up in the canopy and you’ll see some decline.

And once you start seeing that decline, it’s three to five years to mortality. So be observant and contact UMass Extension, DCR, or another agency that can identify the beetle for you.

As far as preservation of ash, if I had a specimen ash tree — aesthetic value, shade for the house — I would consider whether the cost of treatment is going to be worthwhile long term, because it would certainly be a long-term commitment for the management of that individual tree.