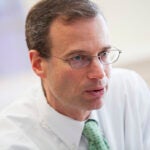 Dan Shore to step down

Plenty to learn for thousands of students in seven-week courses

When Harvard officials extended the length of the University’s summer vacation in 1871, most students and professors probably welcomed the change. One professor went back to class.

Botanist Asa Gray used the extra time to study blooming plants, joined by a handful of students and teachers at his new laboratory in Harvard’s Botanic Garden. Gray’s course was the first summer studies program in the country and the beginning of the Harvard Summer School.

Today, the School offers more than 300 courses from science to Sanskrit, serving 6,200 students from around the world. “We are the size of Harvard College in the summer,” said Lisa Laskin, the School’s associate dean for academic affairs. “We use every available FAS classroom.”

Students are young and old and the pace is quick: Many courses condense a semester’s worth of material into seven weeks. For those taking “Introduction to Theoretical Physics,” a new offering this summer, a perfect attendance record was key.

“They have all been here, every class,” said Jacob Barandes, who teaches the accelerated college credit course in a flexible classroom space on the Science Center’s third floor. As Barandes compared Einstein’s and Galileo’s methods for calculating the sum of different velocities, his class, mostly high school students seeking a more challenging physics curriculum, responded with answers and probing questions. The group was operating at a high level, said Barandes, the associate director of graduate studies in the Physics Department, recalling one student’s particularly sophisticated question about black hole entropy. “That’s a really cutting-edge topic.”

Enrollment in Barandes’ course was typical of the School’s geographic diversity. Of his 25 students, seven were international, from Russia, Colombia, China, Spain, and Canada. The remainder represented 12 states. Kristen Apolinario, a 16-year-old from Wisconsin, saw the class as an opportunity to “study an area completely new to me.” It was also a chance to connect with students who shared her love for physics and math. “It’s a fantastic feeling to discuss Lagrangian mechanics, quantum theory, and special relativity with people that genuinely understand and have passion in the topics,” Apolinario said via email.

As is typical, this year’s classes ranged in size — from the 100-plus students tackling organic chemistry to the handful of Hollywood hopefuls enrolled in a scriptwriting seminar — and covered a dizzying array of topics. In technomusicology, students composed etudes with computer software, while a class of classics-focused students used the writings of the Roman historian Livy as a window into the Roman republic. Others studied Muslim politics, deductive logic, climate change, Tiananmen Square, the architecture of Boston, and Japanese. Topics explored in online courses included the world of finance and the fundamentals of academic writing.

But for many, the challenging and eclectic curriculum was only part of the Summer School experience. The hundreds of students who lived on campus enjoyed the life of a typical undergrad, eating in iconic Annenberg Hall, sleeping in the freshman dorms, working out in Harvard’s gyms, joining organized outings to Boston and beyond, and taking advantage of various college counseling services. One important bonus for any Summer School student: the Harvard ID, a square key to the University’s libraries, archives, and museums.

“Our mission is precisely to make the riches of this extraordinary University available to a very broad population, a very diverse population, to give access to Harvard to those who might not otherwise have what is a really unique and extraordinary opportunity,” said Summer School Dean Sandra Naddaff.

That population includes 1,400 Secondary School Program participants, high schoolers looking for the challenge of a college curriculum and college credit. But the Summer School also enrolls hundreds of foreign students, students working toward their Harvard Extension School degrees, and College students hungry for adventure. Two-thirds of this year’s 550 enrollees in the Summer School’s 24 study-abroad programs — which included trips to Turkey, Germany, and Argentina ― were Harvard undergrads.

Closer to home, in a Farkas Hall studio, students took turns at the head of the class as part of a public-speaking boot camp led by Remo Airaldi, an actor and a Harvard lecturer, on a recent Monday morning.

“You have to make it easy for your audience,” Airaldi reminded the students. Listeners often “judge you by what we see, rather than what you are saying.” He urged the students to stop looking down, to make eye contact, and to be wary of their nervous movements on stage.

One student stumbled at the start of his presentation and struggled to recover. Airaldi encouraged him to simply charge ahead. “Great speeches have tons of mistakes in them, we just don’t notice that they are there. Don’t focus on what just happened, stay present.

Christian Woods, a 15-year-old high school student from Texas with experience in public-speaking competitions, said the class helped him learn how to calm his nerves. “Before, I was a wreck. The thought of me speaking, even though I love it … I have stage fright.”

Six weeks later, after regular practice and input from Airaldi and his classmates, Woods calmly delivered a speech on bullying. It was a fitting subject. The class taught him to not feel intimidated by his listeners, he said, to remember that “they are there for you, so you don’t have to be afraid of them.”

Nearby, another Summer School course was making Harvard’s campus its classroom. “Icons: A Material History of Harvard,” part lecture, part treasure hunt, included tours of libraries, museums, archives, and buildings to help students grasp Harvard’s history through some of its most enduring symbols.

At one point the class made its way to Houghton Library’s printing room, where students took turns working a 19th-century iron hand press. They visited the Harvard University Archives to examine the first rendering of Harvard’s iconic veritas shield. Another outing included a trip to Memorial Hall, where the students studied the names on the walls — a lasting record of the Harvard men killed during the Civil War.

Harvard’s material culture and “experiential learning,” are the course’s guiding principles, said instructor Christina Hodge, a coordinator for academic partnerships at the Peabody Museum of Archaeology and Ethnology. “It’s exploring all those hidden histories of Harvard and using the University as a classroom.”

Teresa D’Onfro was one of the treasure hunters, making a 2½-hour round trip to campus twice a week for Hodge’s class. A mother of three teens who signed up to fill a requirement for her Extension School associate’s degree, she called the course a must for any Harvard student.

“It makes you see the entire campus, everything around you differently. It gives you a richness and a depth … I don’t think I would have ever experienced the campus as I am right now.”