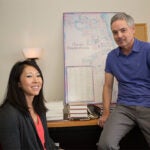 A new view of gentrification

Harvard researchers develop simple detector that could be used worldwide

Harvard researchers have created an inexpensive detector that can be used by health care workers in the world’s poorest areas to monitor diabetes, detect malaria, discover environmental pollutants, and perform tests that now are done by machines costing tens of thousands of dollars.

The device, already in field trials in India, costs about $25 to produce, weighs just two ounces, and is about the size of a pack of cigarettes. It was modeled after the latest generation of inexpensive glucose monitoring devices, which are in widespread use, but whose function is limited to testing blood sugar. In addition to conducting the tests, the new device can send data over the lower-tech cellphones common in the developing world to distant physicians, who can text instructions back to researchers, government officials tracking outbreaks, and others.

“We designed it to be as close as possible to a glucose meter, because that’s familiar to people,” said Alex Nemiroski, a postdoctoral fellow in the lab of Flowers University Professor George Whitesides and lead author of a paper, released today in the Proceedings of the National Academy of Sciences, describing the work. “There are two buttons. Select the test and press ‘go.’ It should be as much of a no-brainer as possible.”

Nemiroski and colleagues in Whitesides’ Lab, the Wyss Institute for Biologically Inspired Engineering, the Kavli Institute for Bionano Science & Technology, Harvard’s School of Engineering and Applied Sciences, and the University of Oviedo, Spain, worked on the device over nearly three years. At this point, Nemiroski said, he’s turned the device over to entrepreneurs interested in commercializing the technology.

Nemiroski, who received a doctorate from Harvard in applied physics in 2011, said he started thinking about the device before his graduation, after which he began his fellowship in Whitesides’ lab. He has long had an interest in global health, and wanted to find a way to bring the high technology that is a feature of Western medicine to resource-poor settings worldwide.

He focused on an electrochemical detector, which measures the voltage or current generated in liquids for characteristic signatures of the liquid’s contents. For example, by applying a small amount of electricity to a drop of blood mixed with a reagent, the device can gauge glucose levels. The same goes for heavy metals in water, malaria antigens in blood, and sodium in urine.

“Electrochemisty — causing chemical reactions by passing electrical current through a solution of appropriate molecules — is a very powerful set of techniques and widely used in chemistry,” Whitesides said. “It has been less widely exploited in bioanalysis, although some of the most widely used biomedical analyses — blood glucose in management of diabetes, serum electrolytes in diagnostic screening, chemiluminescent immunoassays based on production of light — are electrochemical, and are very widespread and useful.”

The equipment currently used in a typical Western lab is large, bulky, and costs around $50,000, according to Nemiroski and Whitesides. Procedures also require other types of laboratory equipment, including mixers, beakers, and expensive reagents. Though reagents, which are substances used in chemical analysis, are also needed for some of the tests done by the device, samples measured in drops need just a small amount of reagent for each test. The device also uses vibration to mix samples.

“The problem with electrochemistry is that the instrumentation can be quite expensive (and large) for some techniques, and is really intended for use in well-equipped laboratories,” Whitesides said. “Our work had three objectives: to make a technologically versatile, hand-held electrochemical reader that was inexpensive and rugged; to demonstrate methods of programming and using this device to do a range of assays relevant in public health, diagnostics in resource-limited environments, and testing for safety and quality of water, food, and other health-related materials; and to make the information provided by the analysis easily uploadable to the Web over even low-end (G-2) cellphones.”

The device’s unique communications capability stems from the understanding that, though medical apps have proliferated recently, most are created to run on the latest generation of smartphones and communicate over the newest and fastest data networks. The reality, however, is that though cellphones have spread through much of the developing world, those phones and their networks tend to be lower-tech, without data capability.

That meant the researchers had to find a new way to send data. They created software that converted the data to audible tones so it could be sent — after plugging the device into the phone’s headphone and microphone jack — just as if it were someone’s voice. The data is then sent over the phone’s audio network to a physician, database, or other recipient.

Nemiroski credited the device’s development to the interdisciplinary nature of Whitesides’ lab. In creating the device, he collaborated with experts in chemistry, biology, and other fields.

Nemiroski recently sent off five units to be field tested in India, and is already at work on the next generation of the device, which will have more features and be able to conduct more tests. With digital miniaturization proceeding rapidly, utility rather than technology may be what limits the number of tests that can be packed onto a future device, he said.