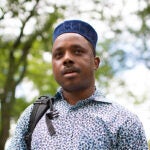 Common Threads: Summer in the Yard

The Boston Refugee Youth Enrichment summer camp, one of 12 Summer Urban Program camps offered by the Phillips Brooks House Association (PBHA), is helping dozens of immigrant children feel more at home and teaching them ways to succeed — both in school and in life.

The camp was established in 1987 to serve Vietnamese immigrants in Dorchester. Today, however, its campers represent 20 countries, including Ecuador, Sudan, and Haiti. The camp has always focused on a classroom curriculum emphasizing English as a second language (ESL), including activities to help children of immigrant families learn their new country’s culture while maintaining a deeper understanding of, and appreciation for, their native culture. The campers are taught the importance of diversity, peaceful conflict resolution, and respecting other campers’ cultures and ways of life.

Like the other camps, the Boston Refugee Youth Enrichment camp is run and coordinated by high school and college students through the PBHA at Harvard University. The camps serve more than 900 low-income, at-risk youth throughout Boston and Cambridge. The counselors work to empower campers to become productive, contributing members of their communities. No child is turned away because of an inability to pay. Counselors say that reaching out to local schools throughout the year helps establish good communication with teachers, and helps funnel children in need of ESL help to the camp.

“The camp is awesome,” said 13-year-old Ben Le. “You get to go on a field trip every day and explore different parts of Boston, so you learn about the city’s history and community. And the kids here are really friendly. You can make friends just by asking questions and playing together.”  Le should know. He’s been a camper in the program for four years, ever since his family immigrated to Boston from Vietnam.

Jose Magana ’15, the incoming president of PBHA, is a passionate advocate for the camp, having served as a senior counselor there for the last three summers.

The camp “is different in that it’s specifically targeted to new immigrants who need to learn English, some of whom arrived in this country as recently as one week ago,” he said. “It’s an extremely diverse camp. One of the expectations for the camp is only speaking English, and it’s amazing to see how quickly growth manifests among the campers, even across so many countries.”

Some campers attend for just a year or two, and others return for several years. Some eventually rise to leadership positions, becoming counselors as they enter high school and college.

The camps “have such a powerful effect on the kids, and I hear that from teachers and community members as well,” said director of PBHA programs Kerry McGowan, who is currently serving his 19th summer with the effort. “It’s just an amazing program.”