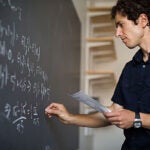 In oncology, the notion of personalized medicine — in which genetic tools can be used precisely to characterize a patient’s cancer and tailor treatment to a genetic profile — is now all but standard practice.

Though personalized treatments for diseases like amyotrophic lateral sclerosis (ALS), epilepsy, and bipolar disorders have remained frustratingly out of reach for neurologists, Harvard scientists say that could soon change.

A new technique for observing neural activity, developed by Adam Cohen, professor of chemistry and chemical biology and of physics, and colleagues including Venkatesh Murthy, professor of molecular and cellular biology, and Bernardo Sabatini, the Takeda Professor of Neurobiology at Harvard Medical School, will allow scientists to stimulate neurons and observe their firing pattern in real time. Tracing those neural pathways can help researchers answer questions about how neural signals propagate, and could one day allow doctors to design individualized treatments for a host of disorders. The study is described in a paper in Nature Methods.

“This is a tool for looking in great detail at how signals flow through neurons, and how the signal flows through circuits of neurons,” Cohen said. “You can think of this as a complete neuro-electronic interface, where you can stimulate any piece of the circuit, or any subcellular region, in any pattern of space and time you can dream of. And you can then record absolutely everything that’s going on in that circuit.”

This video, displayed in the best possible resolution at present, shows a rat neuron genetically modified to express the Cohen Lab’s “Optopatch” proteins. A flash of blue light delivered to the center of the cell excites it to fire an action potential. The cell reports its firing as a flash of red fluorescence. In this video, the researchers have used a computational technique to map the propagation of the action potential at a time resolution of 100,000 frames/s. Credit: Daniel Hochbaum

For obvious reasons, Cohen said, it’s impossible to peer into neural circuits in the brains of living patients. The new tool, however, allows researchers to do the next-best thing. By using human-derived stem cells to culture neurons in the lab, scientists will be able to observe neurons that are genetically identical to those in a patient’s brain.

In addition to offering invaluable insight into how healthy neural circuits work, the system can be used to probe how disease might cause those circuits to go awry.

“For many of these diseases of the nervous system, we just don’t have good treatment. And in cases where there are treatments, it’s often a very trial-and-error process to find the right drug, or combination of drugs, and all the while the patient is suffering,” Cohen said. “Part of the reason it’s been so difficult to develop good treatments is we haven’t had good ways to test their effectiveness.

“Even though these cells cultured in the lab don’t have the full context of the brain, and they don’t have the experiences that also contribute to these diseases, the genetic basis is still there. You can find echoes in the dish of what’s going on in a patient,” he continued. “You can use that as the basis for trying to understand the mechanism of the disease, and ultimately to test drugs.”

Though he was first able to demonstrate the ability to observe neurons firing in real time as early as 2011, Cohen said the new system represents a dramatic leap forward.

“Initially, we only had the sensitivity to look at one cell at a time,” Cohen said. “Now, we’ve developed an optical system with a field of view that is several millimeters on a side, so we can look at 100 neurons or more in parallel, and see how their activity is interrelated.”

As in the earlier study, Cohen and colleagues began with a protein produced by a Dead Sea microorganism that, when stimulated, emits a red fluorescent color. Working with colleagues at the University of Alberta, Cohen was able to engineer a vastly improved version of the protein that emits a brighter color and is more sensitive to neural activity.

To develop a method for stimulating neurons in the lab, Cohen and colleagues at Massachusetts Institute of Technology engineered a second protein that, when exposed to blue light, would trigger neurons to fire, and custom-designed software to map how the signals propagated at as many as 100,000 frames per second.

By adapting a video projector to send pulses of blue light into a microscope, Cohen said, the researchers were able to stimulate neurons in any pattern and record the resulting cascade of neural activity