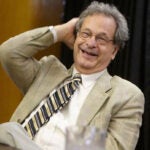 Alex Calabrese has come a long way from Neversink, the tiny New York town (pop. 3,557) where he fell in love with sports, guitar, and swimming.

But even if he’s moved on, making a new home in Boston, he’s stayed true to his Neversink roots, by avocation — playing in a neo-folk band of the same name — and occupation. Calabrese is Harvard’s first full-time lifeguard in nearly a decade.

While keeping swimmers afloat is Calabrese’s job, “the original town of Neversink is actually underwater. It was bought by New York City and turned into a reservoir,” he said.

Thankfully, Calabrese has never had to make a dramatic rescue. At the Malkin Athletic Center, where he oversees the pool, “It’s a lot of responsibility, but very low stress.”

Having lived in Boston less than a year, Calabrese has not sunk — rather, he’s made a name for himself. He arrived in November with his friend and bandmate Chris Adelmann. The duo turned up at the Lansdowne Pub for what they thought was an open mic.

But it was a competition.

They were unregistered, but their gear was there and ready, and so they got the green light to go on — and they won.

The second round they lost — “to a 17-year-old with a set of pipes. Wow!” said Calabrese — but they’d made fans of the pub’s crowd and its managers, and were invited to perform regularly.

Managers at the Lansdowne soon played matchmaker, introducing Calabrese and Adelmann to a Celtic group that performed Sundays at the pub. The meeting would fuse the two groups into one.

Now, Neversink plays every Sunday at the Lansdowne. Calabrese still roots for his home teams, even as he’s unabashedly embraced Boston, a city whose working-class vibe is a better match for his band’s folk aesthetic.

“There’s this blue-collar thing that Boston has that no other place has,” said Calabrese. “And the folk scene here is growing, and is a big family. New York is really cliquey.”

Having a grassroots credo is critical to Calabrese. Every member of Neversink sings and writes and Calabrese is adamant about releasing the band’s music gratis to anyone who wants it.

“Music is one of those things everyone can be a part of, and how it’s been made into an industry saddens me,” he said.

Still, he’s made enough money from his Harvard and Neversink gigs to move, along with Adelmann, from a cramped, one-bedroom split in Arlington to a house in Allston, a hub of the local music scene.

“As much as I love working as a lifeguard at Harvard, I would like to see myself on a larger stage,” he said.

For a New Yorker, Calabrese is open with his emotions. “I love that traditional style of songwriting where you have a blend of hope and self-loathing, love, traveling, overcoming obstacles …” he said. “Hemingway said writing was easy: ‘All you do is sit at a typewriter and bleed.”’