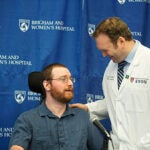 Stem cell scientists scored what at first appeared an easy win for regenerative medicine when they discovered mesenchymal stem cells several decades ago. These cells, found in bone marrow, can give rise to fat, bone, and muscle tissue, and have been used in hundreds of clinical trials for tissue repair. Unfortunately, the results of these trials have been underwhelming. One problem is that these stem cells don’t stick around in the body long enough to benefit patients.

But Harvard Stem Cell Institute (HSCI) scientists at Boston Children’s Hospital aren’t ready to give up. A research team led by Juan Melero-Martin and surgical research fellow Ruei-Zeng Lin recently found that transplanting mesenchymal stem cells along with blood-vessel-forming cells naturally found in circulation improves results. This co-transplantation keeps the mesenchymal stem cells alive longer in mice after engraftment — up to a few weeks compared with hours without co-transplantation.

This improved survival gives the mesenchymal stem cells sufficient time to display their full regenerative potential, creating new bone or fat tissue in recipient mouse bodies. The finding was published in the Proceedings of the National Academy of Sciences (PNAS).

“We are losing mesenchymal stem cells very rapidly when we transplant them into the body, in part because we are not giving them what they need,” said Melero-Martin, an HSCI-affiliated faculty member and an assistant professor of surgery at Boston Children’s Hospital, for Harvard Medical School.

“In the body, these cells sit very close to the capillaries, constantly receiving signals from them, and even though this communication is broken when we isolate mesenchymal stem cells in a laboratory dish, they seem to be OK because we have learned how to feed them,” he said. “But when you put the mesenchymal stem cells back into the body, there is a period of time when they will not have this proximity to capillary cells, and they start to die. So including these blood-vessel-forming cells from the very beginning of a transplantation made a major difference.”

Melero-Martin’s research has immediate implications, as current mesenchymal clinical trials don’t follow a co-transplantation procedure. He is already collaborating with surgical colleagues at Boston Children’s Hospital to see if his discovery can help improve fat and bone grafts. However, giving patients two types of cells, as opposed to one, would require more time and experiments to determine safety and efficacy. Melero-Martin is seeking to identify the specific signals mesenchymal stem cells receive from the blood-vessel-forming cells in order to be able to mimic the signals without the cells themselves.

“Even though mesenchymal stem cells have been around for a while, I think there is still a lack of fundamental knowledge about communication between them and other cells in the body,” he said. “My lab is interested in going even beyond what we found to try to understand whether these cell-cell signals are different in each tissue of the body, and to learn how to educate both blood-vessel-forming and mesenchymal stem cells to coordinate tissue-specific regenerative responses.”

Other HSCI researchers are studying mesenchymal stem cells as bioengineering tools to deliver therapeutics, which is possible because of the cell type’s unique ability to not trigger an immune response. Jeffrey Karp at Brigham and Women’s Hospital has developed several methods to turn these cells into drug-delivery vehicles, so that after transplantation they can, for example, hone in on swollen tissue and secrete anti-inflammatory compounds. And Khalid Shah at Massachusetts General Hospital has designed a gel that holds mesenchymal stem cells in place so that they can expose brain tumors to cancer-killing herpes viruses.

“A lot of these applications have no real direct link with mesenchymal stem cells’ supposed progenitor cell function,” Melero-Martin said. “In our study, we went back to the collective ambition to use these cells as a way to regenerate tissues, and we are not in a position to say how that affects other uses that people are proposing.”

The work was supported by the National Institutes of Health.