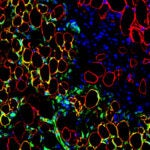 Findings by Harvard-affiliated researchers could overcome major cause of blindness

By Massachusetts Eye and Ear Communications

Researchers have identified a way to enhance regrowth of human corneal tissue to restore vision, using a molecule that acts as a marker for hard-to-find limbal stem cells.

This work, a collaboration among the Harvard-affiliated Massachusetts Eye and Ear/Schepens Eye Research Institute, Boston Children’s Hospital, Brigham and Women’s Hospital, and the VA Boston Healthcare System, holds promise for burn patients, victims of chemical injury, and others with damaging eye diseases. The research, published this week in the journal Nature,is also one of the first examples of constructing a tissue from an adult-derived human stem cell.

Limbal stem cells reside in the eye’s basal limbal epithelium, or limbus, and help to maintain and regenerate corneal tissue. Their loss due to injury or disease is one of the leading causes of blindness. In the past, tissue or cell transplants have been used to help the cornea regenerate, but it was unknown whether there were actual limbal stem cells in the grafts, or how many there might be, and the outcomes were not consistent.

In this study, researchers were able to use antibodies detecting the marker molecule, known as ABCB5, to zero in on the stem cells in tissue from deceased human donors and use it to regrow anatomically correct, fully functional human corneas in mice.

“Limbal stem cells are very rare, and successful transplants are dependent on these rare cells,” said Bruce Ksander of Mass. Eye and Ear, co-lead author on the study with postdoctoral fellow Paraskevi Kolovou. “This finding will now make it much easier to restore the corneal surface. It’s a very good example of basic research moving quickly to a translational application.”

‘A single lab cannot do a study like this.’ — Natasha Frank, Harvard Stem Cell Institute affiliate

Researchers in the lab of Markus Frank of Boston Children’s Hospital and Natasha Frank of the VA Boston Healthcare System and Brigham and Women’s Hospital, the co-senior investigators on the study, discovered that ABCB5 was being produced in tissue precursor cells in human skin and intestine. In the new work, using a mouse model developed by the Frank lab, they found that ABCB5 also occurs in limbal stem cells and is required for their maintenance and survival, and for corneal development and repair. Mice lacking a functional ABCB5 gene lost their limbal stem cells, and their corneas healed poorly after injury.

“ABCB5 allows limbal stem cells to survive, protecting them from apoptosis [programmed cell death],” said Markus Frank. “The mouse model allowed us for the first time to understand the role of ABCB5 in normal development, and should be very important to the stem cell field in general,” according to Natasha Frank.

Markus Frank is working with the biopharmaceutical industry to develop a clinical-grade ABCB5 antibody that would meet U.S. regulatory approvals. “A single lab cannot do a study like this,” said Natasha Frank, who is also affiliated with the Harvard Stem Cell Institute. “It integrates genetics, knockout mice, antibodies, transplantation — a lot of technical expertise that we were lucky came together in a very nice way.”