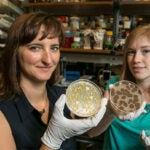 “LFMS is unlike any current treatment. It uses magnetic fields that are a fraction of the strength but at a higher frequency than the electromagnetic fields used in TMS [transcranial magnetic stimulation] and ECT [electroconvulsive therapy],” explained first author Michael Rohan, a physicist at McLean Hospital’s Brain Imaging Center and a lecturer at Harvard Medical School.

According to Rohan, although other brain stimulation treatments like ECT and TMS are often effective for the treatment of depression, they typically take longer to impact mood, and ECT is associated with side effects such as memory loss.

Similarly, while antidepressant medications can be highly effective for treating depression, it can take between four to six weeks before mood changes are detected.

“Importantly, LFMS appears to have an immediate effect on mood and thus has the potential to provide relief in emergency situations,” explained Rohan, who first reported the potential use of LFMS to treat depression in a groundbreaking study in 2004. “In addition to providing quick relief from symptoms, the other exciting piece about LFMS is that no side effects have been observed.”

Using a portable tabletop LFMS device that Rohan designed, the researchers studied 63 volunteers between the ages of 18 and 65. All participants had been diagnosed with either major depressive disorder or bipolar disorder and had been on a regimen of antidepressants or mood-stabilizing medications for at least six weeks. Of the study participants, 34 actively received LFMS, while the other 29 went through the process but did not actually receive any brain stimulation. Since neither the patients nor the researchers knew which participants had actually received the treatment, the true effect of the LFMS could be measured.

Each participant rated his or her mood before and after the single 20-minute treatment using two common self-assessment tools: a visual analog scale and the positive and negative affect schedule. Participants who received the LFMS treatment indicated a marked improvement in their mood, while those whose brains were not stimulated reported no change in mood.

“We observed immediate improvement in mood following relatively brief exposure to LFMS,” noted Rohan. “Although larger research studies are needed, we think LFMS could be a powerful tool as a rapidly acting treatment for depression, either alone or in combination with medication.”

“If the results described in this study are replicated in larger studies and the effects are shown to be durable, LFMS would be a welcome addition to the clinical armamentarium in the treatment of depression, may find application in other psychiatric and neurologic diseases, and may help to inform and guide us toward future directions in neuromodulation,” wrote Mouhsin Shafi, Philip Stern, and Alvaro Pascual-Leone.

According to Rohan, additional research is already underway to find the best parameters for LFMS use in the clinical treatment of depression. He has also started a research study to evaluate the effects of multiple rather than to single treatments, and measure how long the antidepressant effects last following treatment.

McLean Hospital is an affiliate of Harvard Medical School.