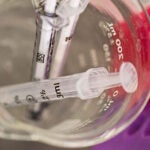 Study in NEJM reviews 10 years of data, argues for expansion of newborn screening

Children born with so-called “bubble boy” disease have the best chance of survival if they undergo a hematopoietic stem cell transplant as soon after birth as possible, according to a detailed analysis of 10 years of outcome data by researchers at the Harvard-affiliated Dana-Farber/Boston Children’s Cancer and Blood Disorders Center. Researchers say the findings support expanding newborn screening for severe combined immune deficiency (SCID), a disorder that leaves affected infants so vulnerable to infection that most die within the first year of life if untreated.

The study, published today in the New England Journal of Medicine, analyzed data on 240 children with SCID who underwent transplants at 25 centers across North America between Jan. 1, 2000, and Dec. 31, 2009, the decade before the U.S. Department of Health and Human Services recommended newborn screening for SCID in 2010. Currently, 21 states and the District of Columbia — together home to about two-thirds of all babies born in the United States — screen newborns for SCID. Another nine states are expected to implement newborn screening by the end of 2014.

In addition to patient age, the analysis found that infection status at the time of transplant and donor source had the strongest impact on transplant outcomes (i.e., five-year survival and successful immune system reconstitution).

“Survival is much, much better if infants undergo transplant before they turn 3½ months old and before they contract any SCID-related infections,” said study first author Sung-Yun Pai of Dana-Farber/Boston Children’s. “The best way to identify patients that early when there is no family history of SCID is through newborn screening.”

Data gained from newborn screening suggest that SCID, while still rare, is twice as common as once thought. “Some children who succumbed to unexplained infections probably suffered from SCID,” Pai noted. The disorder is now estimated to occur in one of every 50,000 births, up from earlier estimates of one in 100,000.

“Time is not the ally of children with SCID,” said Luigi Notarangelo of Boston Children’s Hospital, one of the study’s senior authors, who was among those who lobbied successfully to establish SCID newborn screening in Massachusetts in 2009. “Because they do not have a functional immune system, the longer the wait before a transplant, the greater the risk they will contract a potentially devastating infection.”

The new study was conducted under the auspices of the Primary Immune Deficiency Treatment Consortium, a North American collaborative supported by the National Institutes of Health. It looked at the effect on outcomes of patient age, infection status, donor source, and the use of chemotherapy to condition patients prior to transplant.

Children who underwent transplant before 3½ months of age had excellent survival, regardless of donor source or infection status, as did patients transplanted with the stem cells of a matched sibling donor, long recognized as the gold standard of transplants. Children outside that age group also had very good survival regardless of donor source — sibling, parent, or unrelated donor — as long as the patient did not have an active infection at the time of transplant. The effect on survival of donor type and pre-transplant conditioning was only discernible in actively infected patients.

While survivors who received chemotherapy conditioning had stronger immune systems after transplant, further research is needed, Pai said, to determine whether the late effects of chemotherapy or the vulnerabilities of a weaker immune system pose the greater long-term risk.

“This study accomplishes several things,” she said. “First, it creates a baseline with which to compare patient outcomes since the advent of newborn screening for SCID. Second, it provides guidance for clinicians regarding the use of chemotherapy conditioning before transplantation. Third, it highlights the relative impacts of infection status and patient age on transplant success.

“Lastly, it establishes the importance of early detection and transplantation, which points to the benefit of expanding newborn screening for SCID as broadly as possible.”