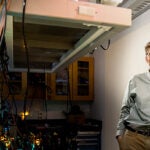 Marc J. Roberts, a longtime professor at the Harvard School of Public Health (HSPH) whose former students run health systems across the country and around the world, died suddenly Saturday night at his home in Cape Cod, Mass. His death, apparently from a pulmonary embolism, was confirmed by his partner Mary Ann Stevenson, chair of the Department of Radiation Oncology at Beth Israel Deaconess Hospital. He was 71.

Roberts retired from Harvard in 2013 but continued a vigorous consulting practice, traveling widely and teaching public officials how to set up efficient health-delivery structures. At his death he was planning an extensive fall teaching tour to Turkey, South Africa, and Spain.

While Roberts was the author or co-author of seven books and numerous articles on health policy, perhaps his biggest impact came through his students. Many remained deeply devoted to him throughout their careers and often invited him to visit their home countries and train the next generation of health officials and experts.

HSPH held a symposium in March 2013 honoring Roberts at his retirement. One of the speakers, Karl Lauterbach, a former doctoral student who now serves in the German Bundestag, said: “A lot of what I currently do is inspired by Marc. I have had many brilliant teachers. The best teacher of all teachers I’ve had is Marc. There is no one I have learned more from than him. We did not always agree on issues, but he taught me how to think, not what to think.”

Roberts’ most important book, “Getting Health Reform Right: A Guide to Improving Performance and Equity” (Oxford University Press, 2004), has become a classic in the field of global health and has been translated into five languages, including Chinese and Arabic. One of his co-authors, Michael R. Reich, recalled: “Marc excelled at engaging these health leaders at multiple levels — intellectual, personal, ethical, and political. Through his case teaching style, his stories, and his humor, he gave them nuggets of wisdom that they could take home and use in solving their most difficult policy problems. His loss is literally being felt around the world.”

Roberts was born on Feb. 11, 1943, in Bayonne, N.J. His grandparents fled the anti-Semitic pogroms of Eastern Europe and settled in Bayonne, an industrial town across the Hudson River from New York City. His father, Will Roberts, was a writer and publisher of children’s books; his mother, Dorothy Schanbam Roberts, was a homemaker. He graduated from Bayonne High School with top honors and was elected governor of New Jersey Boys State.

His interests ranged widely and he taught courses in economics and ethics, environmental and health policy. In 1990 he pioneered the development of a new required course in ethics and public policy — a first for any public health school in the country. His classroom style — challenging and forceful, often laced with humor and an occasional profanity — was “legendary” according to Reich. “Students viewed the world differently after a public-health course with Professor Roberts,” he said.

Roberts was always interested in solving real-world problems, not spinning abstract theories. That led him to serve as an economic adviser to several presidential candidates, including Michael Dukakis and Edward Kennedy. Both men lost and Roberts never served in Washington, but he satisfied his calling to public service on the international stage.

Working with the World Bank Institute and several colleagues from Harvard, Roberts helped develop what was called the Flagship Course on Health Sector Reform and Sustainable Financing. Starting in the late 1990s, more than 20,000 health professionals from over 30 countries have taken the course. One of his focal points was Egypt, which he visited many times in recent years to help improve the public hospital system in that country.

Hadia Samaha, one of his teaching colleagues, wrote from the Congo: “I had the pleasure and honor of working with Marc for more than 10 years, traveling the world with him and witnessing how he would captivate his audience, doing what he lived to do most: teaching.”

Stevenson will be receiving friends at their home, 130 Lagrange St in Chestnut Hill, from 5-8 p.m. on Tuesday, Wednesday, and Thursday. A memorial service at Harvard will be held in the fall. A fund is being established to create a prize in Roberts’ name, to be awarded to an outstanding doctoral candidate at HSPH. Contributions to the Marc J. Roberts Financial Aid Fund can be sent to the Harvard School of Public Health, 90 Smith St., Boston MA 02120. For questions and inquiries, call 617.432.8076.