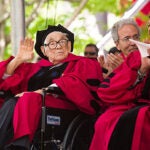 Each research team receives an average of $1 million over a three-year period. This year, awardees’ laboratories are located in 17 different countries, including 51 laboratories in Europe, 34 in North America, eight in Japan, and seven in Canada.

“Our grant program is the only existing mechanism that supports scientists from more than two countries in a joint research effort,” said Ernst-Ludwig Winnacker, secretary general of the International Human Frontier Science Program Organization. “HFSP grants are unique because they offer a broad and unrestricted collaborative approach to teams of outstanding scientists from all over the world.”

Nelson and Murray will work with their French colleague François Taddei from the Center for Research and Interdisciplinarity in Paris to study how social behaviors evolve in yeast and bacteria.

Scientists usually think about organisms like this as single cells, floating about in nutrient broths, with each cell dividing independently, indifferent to the behavior and fate of its neighbors. Recent work has called this view into question. For example, sucrose, the sugar that yeast ferment to make wine, is broken down into two simpler sugars — glucose and fructose — by an enzyme that is lodged in the cell wall, rather than located inside the cell. As a result, most of the glucose a cell produces drifts away into the surrounding liquid, rather than being captured by the cell that liberated it. But if cells stick together, each one captures some of the glucose liberated by its near neighbors and, as a result, the cells are fed well enough to grow and divide. Murray’s lab has shown that this phenomenon creates a selective pressure that can drive the evolution of multicellular yeast clumps in the laboratory, suggesting that the better use of public goods may have been the original evolutionary pressure that led to the appearance of multicellular organisms.

Their work will shed light on the factors that led to the evolution of cooperation between groups of genetically identical cells and the transfer of genes between genetically different cells, two types of interaction that have profoundly affected the evolution of microbes, plants, and animals.

Samuel and Lichtman, in collaboration with current Radcliffe Fellow Mei Zhen (University of Toronto) and Jean-Louis Bessereau (University of Lyon), will use their HFSP award to look at whole nervous system development from birth to adult in the nematode C. elegans. The new field of connectomics — the study of comprehensive maps of connections called connectomes within an organism’s nervous system — is accelerating the use of electron microscopy to map entire brains at synaptic resolution, figuring out the connections between all neurons and muscle cells. During development, the brain and nervous system undergo radical changes to organize behavior from infancy to maturity. The small size of the nematode is advantageous as it provides the significant opportunity to map every change in the nervous system across an animal’s lifespan.

Engert will collaborate with Hérnan López-Schier of the German Research Center for Environmental Health inGermany and Ana Belen Elgoyhen of INGEBI-CONICET in Argentina on mechanosensation, the transmission and perception of neuronal stimuli. Their project will address distinguishing between external influences and self-generated stimuli in the brain.

In addition, Pier Pandolfi, director of the Cancer Center at Harvard-affiliated Beth Israel Deaconess Medical Center, won an HFSP award for his project on non-coding RNA regulatory networks and their role in cancer cell biology.

The Human Frontier Science Program is an international program of research support implemented by the International Human Frontier Science Program Organization (HFSPO) based in Strasbourg, France. Its aims are to promote intercontinental collaboration and training in cutting-edge, interdisciplinary research focused on the life sciences. HFSPO receives financial support from the governments or research councils of Australia, Canada, France, Germany, India, Italy, Japan, South Korea, New Zealand, Norway, Switzerland, the United Kingdom, the United States, as well as from the European Union.