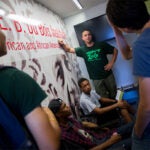 The tour groups shuffling through Harvard Yard paused ever so briefly between taking photographs of the John Harvard Statue and Widener Library’s grand staircase to glance curiously at the throngs of senior citizens gathered around dozens of crimson-clad tables, busily chatting and nibbling watermelon wedges as Jimmy Buffett’s “Margaritaville” lilted through the air.

The University and the city of Cambridge hosted hundreds of local seniors today for an afternoon picnic lunch, along with a live band and dancing, all under the swaying, stately trees of Tercentenary Theatre. Now in its 39th year, the Senior Picnic is just one of many events and initiatives Harvard holds regularly to welcome the wider community onto campus.

“Harvard is made stronger by being part of a vibrant Cambridge community that cares so much about its residents, so much about its thriving universities, and so much about seniors,” Christine Heenan, Harvard’s vice president of public affairs and communications, said in her welcoming remarks.

Mayor David P. Maher introduced the festivities and thanked the University and its staff for partnering with Cambridge to stage the event. Several local leaders and candidates running for city and statewide office in November, also turned out to meet the seniors.

About 50 teenagers working in the Mayor’s Summer Youth Employment Program, which offers part-time jobs to local high school kids, packed gift bags filled with jars of blueberry and strawberry jam and a city-themed calendar. A short while later, they filed over to the catering tent to begin serving the cold luncheon of grilled chicken breast, penne pasta salad, and tomato, basil, and fresh mozzarella salad.

Josephine Almeida, 88, came with a large, mostly female cohort from the East End House in East Cambridge. She has been a picnic regular for many years. “It’s really nice, I enjoy it,” she said. “We’ve always filled every one of the tables here.”

Joanne Nelson has been accompanying her mother, Cambridge resident Sandra Dimaio, 89, to the picnic every summer since 1993. It’s one of a few local events, like the Harvard Square Chocolate Festival, for which Dimaio doesn’t need much persuasion to leave the house, Nelson said.

“It’s nice. It gives us something to do,” said Dimaio, one of a group who arrived together by bus from the Kennedy-Longfellow School, but then spread out across the Yard. “It’s better than staying at home,” she joked.