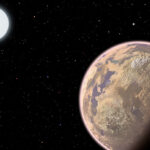 For those of you on the edge of your seat wanting to know how the global climate crisis turns out, that’s the short answer.

But to skip to the end would be missing the point of Professor Naomi Oreskes’ latest book, a novella called “The Collapse of Western Civilization.” Because, though the book is fictional, it is fact-based, and the lessons it holds lie not in the fanciful outcome but in how the world gets there.

And that part of the story, unfortunately, is quite serious.

In crafting their cautionary tale, Oreskes and co-author Erik Conway of the California Institute of Technology relied heavily on scientific predictions of what is likely to happen by the turn of the century should the world not pick up the pace in responding to climate change.

Rising seas, killer heat waves, and lengthy droughts all take their toll in the book, published in July by the Columbia University Press. Both the Greenland and the West Antarctic ice sheets collapse, with the heat and the rising water leading to mass migrations, food shortages, riots, disease outbreaks, and wide-scale extinction. By 2093, Western Civilization as we know it is kaput.

Oreskes, a science historian whose last book, 2010’s “Merchants of Doubt,” tackled the links between the tobacco wars and climate change denial, said she and Conway wanted to translate the reams of material predicting what could happen if climate change is ignored from scientific jargon into something easily understood. Further, they decided on a fictionalized account by a future historian as a way to tell the story in an engaging way.

“We took all the IPCC [Intergovernmental Panel on Climate Change] model projections and asked, what does that look like?” Oreskes said. “Erik and I took that best guess and put it in a story that is easy to read.”

Though the research took a while, much of the book’s narrative was penned over several weeks of downtime in Australia, Oreskes said.

The fictional approach gave Oreskes and Conway free hand to talk about 2023’s Year of Perpetual Summer, the Great Collapse of the ice sheets after 2073, and the coming fossil-fuel frenzy sparked by shale gas and melting Arctic ice, which makes matters worse by by opening vast areas to oil exploration.

Perhaps most frightening are the portions that reflect modern history — the failed Copenhagen climate talks of 2009 are remembered our “last best chance” to avert disaster, and 2012’s “year without a winter” is seen as another ominous warning that the West ignored.

In Oreskes and Conway’s telling, there is plenty of blame to go around. Though the “carbon-combustion complex” — pro-fossil fuel forces — gets central billing, the story also implicates scientists for failing to get their message across and adhering to overly strict definitions of scientific certainty, and politicians for not acting on that message, however inexpertly delivered.

China survives for two reasons, Oreskes said during an interview. First, though the nation is building coal-fired plants rapidly and has recently become the world’s largest annual greenhouse gas emitter — though it still lags the U.S. on a per-capita basis — it is also furiously building renewable-energy plants: hydro, solar, and wind. Once the scale of climate change becomes apparent and its leaders decide to take action, the country has significant infrastructure in place to kick-start the process.

The second reason is China’s authoritarian form of government, which allows it to respond more rapidly as a nation to global-scale calamities.

Oreskes said the choice of China was also the outgrowth of an ongoing discussion between her and Conway — “the irony conversation.” The pair’s research indicates that one motivation for those who oppose climate action is fear that climate change might be used as an excuse for excessive regulation, harming democratic government and economic freedom. The novella, she said, highlights the irony of that position: Deniers are raising the risk of a disaster big enough to favor the survival of more authoritarian forms of government.

Though the book has enough villains to go around, it is short on heroes. Oreskes makes no apology for that.

“This is a historian of the future looking back,” Oreskes said. “This is a story about failure.”