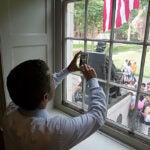 Harvard’s Hutchins Center was caught in a wave of anticipation and excitement as Cambridge teens descended on its Hiphop Archive and Research Institute one recent morning.

The energy was palpable as the exclamations, questions, and answers tumbled over each other. “This is so dope!” “You have an actual Biz Markie doll?” “Did Tupac actually wear those shoes?”

The 13 teens, ranging in age from 14 to 18, were part of The Hip Hop Transformation (THHT) program. Just a year old, the program is offered free by the Cambridge Community Center, in partnership with the Cambridge Health Alliance, the Cambridge Police Department, and the Mayor’s Summer Youth Employment Program. Its goal is to teach teens the history of hip-hop, its role in society, and the skills it takes to write, record, and perform original music.

“There is a lot you can learn from the culture of hip-hop. You can learn about the culture of change — and use that change for the greater good,” said Harvard senior Brandon Jarrett, a research assistant at the Hiphop Archive and Research Institute, who led the tour. “Where else would you have such an archive than at the worldwide epicenter of education — Harvard. Here we put an academic lens on hip-hop.

Established in 2002, the Hiphop Archive at the Hutchins Center for African and African American Research has worked to support and establish research and scholarship devoted to all facets of hip-hop, including knowledge, art, culture, materials, and responsible leadership. Its innovative programs and projects encourage students to explore their own creativity.

“We want this to be the center of the universe for anyone who is serious about hip-hop, and we want knowledge to be at the core,” said Marcyliena Morgan, executive director of the archive and a professor in Harvard’s Department of African and African American Studies.

During their visit, the students explored the records, shoes, dolls, games, magazines, DVDs, autographs, and pictures that stud the center’s archives. They challenged each other to a hip-hop quiz, watched video clips about the positive possibilities hip-hop can bring to their lives, and put their own tags on the archive’s graffiti wall. (The program also gives the students the chance to create and record their own songs, which are then distributed across the city of Cambridge. At the end of its first summer, THHT put out a full album.)

This was the second year that 17-year-old Genesis Flores, who will be a senior at Cambridge Rindge and Latin School this fall, has participated in THHT, but it was his first time visiting the archive.

“I can’t believe Nas was here. And 9th Wonder was here — right here!” Flores said, as his own music played over loudspeakers during the final legs of the tour. His rap was one of five tracks written, performed, and produced by the students. (The demo is available on the THHT website.)

“This trip has been great for [the students],” said Darrin Korte, a professor of race relations at Emerson College and founder and director of THHT. “Bringing them here, and allowing them to see the exhibits and hear the speakers — it all reinforces that there are positive role models out there.

“I can tell them over and over again — but it means so much more for them to see and hear from these folks that being invested in hip-hop can be a positive, learning experience.”