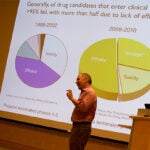 ‘Broken genes’ for a broken system

Go ahead, call Rachel Dutton’s research cheesy if you must. As far as she’s concerned, it’s anything but an insult.

A Bauer Fellow at the Faculty of Arts and Sciences’ Center for Systems Biology, Dutton studies cheese — or more precisely, the bacteria and fungi that live on it — in an effort to better understand how microbial communities form.

After studying 137 varieties collected in 10 countries, Dutton has identified three general types of microbial communities that live on cheese, opening the door to using each as a model for the study of whether and how various microbes and fungi compete or cooperate as they form communities, as well as what molecules and mechanisms are involved in the process. The study is described in a July 17 paper in the journal Cell.

“We often use model organisms like E. coli or C. elegans because they can give us an understanding of the basic mechanisms and principles of how biology works,” Dutton said. “The goal of this work was to identify something like a model organism, but for microbial communities — something we can bring into the lab and easily replicate and manipulate.

“The challenge in studying these communities is that many of the environments where they are found, such as the human body or the soil, are hard to replicate because they’re so complicated,” she continued. “Cheese seemed to offer a system … in which we knew exactly what these communities were growing on, so we thought we should be able to replicate that environment in the lab.”

To understand what a model community might look like, Dutton and her lab first set out to identify naturally occurring communities by collecting samples from the rinds of dozens of cheeses.

“We did some traveling in Europe and worked directly with a number of cheesemakers by having them send us samples or visiting to collect samples, and in some cases we were able to collect samples from places like Formaggio Kitchen and other cheese shops,” she said.

By sequencing the samples, Dutton pinpointed the type of bacteria and fungi in each, and found that while there was wide variation among different samples, each could be separated into one of three main types of communities.

“What we ended up finding is there are microbes which occur in all the areas where cheese is made,” she said. “What was interesting is if you make the same type of cheese in France or in Vermont, they will have very similar communities. What seems to be driving the type of community you find is the environment that the cheesemaker creates on the surface of the cheese, so you can make two cheeses that are very similar in two different places, or you can make two very different cheeses in the same place.”

Dutton and her colleagues isolated species of microbes and fungi found in the samples and conducted tests aimed at reproducing the communities they found. “In many environments, it is challenging to isolate all of the microbes, so we were surprised to find that we could culture all of the species present on cheese rinds,” said Julie Button, a postdoctoral researcher in the Dutton lab. “This gives us a great foundation for being able to study communities in the lab.”

“If we know a particular cheese has certain species, we can mix them together and try to recreate that community in the lab,” Dutton added. “For example, we might try to simply put those species together at the same time in equal amounts to see if the community that forms is similar to that found in the sample.”

The study was also aimed at understanding how various species of bacteria and fungi interact, and identified several instances where certain bacteria halted fungal growth, and vice versa.

“We are now working with chemists to characterize what the molecules are that different bacteria might use to kill a fungus,” Dutton said. “It’s also possible that there may be antimicrobials that may arise from this that are normally at play during the formation of a community.”

While wider applications for understanding the development of bacterial communities may eventually emerge, Dutton said there are still basic questions to answer in the short term.

“There are so many wide-open questions in thinking about how microbial communities work, that future research could go in a number of different directions,” she said. “Our goal is to understand some of these fundamental questions, such as: Are there certain principles that are operating as a community forms, and can we control those factors in the lab?

“Cheese is fascinating to me in its own right — it’s somewhat surprising that, for a food that we’ve been eating for thousands of years, we don’t have a complete understanding of the microorganisms that are present.”

Now that Dutton is closing in on that understanding, does she still eat cheese?

“I do,” she said with a laugh. “But I’m very picky, because I like very good cheese now.”