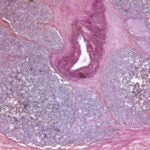 Study pinpoints a molecular cause of cachexia, and hints at a potential treatment

New research from scientists at Dana-Farber Cancer Institute, a Harvard affiliate, raises the prospect of more effective treatments for cachexia, a profound wasting of fat and muscle that occurs in about half of all cancer patients, raising their risk of death.

Many strategies have been tried to reverse the condition, which can cause such frailty that patients can’t endure potentially life-saving treatments, but none have had great success.

In the July 13 advanced online edition of Nature, scientists led by Bruce Spiegelman, the Stanley J. Korsmeyer Professor of Cell Biology and Medicine at Harvard Medical School, reported that symptoms of cachexia in mice with lung tumors improved or were prevented when the mice were given an antibody that blocked the effects of a protein, PTHrP, secreted by the tumor cells. PTHrP, which stands for parathyroid hormone-related protein, is known to be released from many types of cancer cells.

The scientists said their findings were the first to explain in detail how PTHrP from tumors switches on a thermogenic (heat-producing) process in fatty tissues, resulting in unhealthy weight loss. They found that the tumor-derived protein stimulated “beige” or brown fat cells mixed with stored white fat in the body. The stimulation caused white fat to “brown” — that is, generate heat and cause weight loss even when the animals were at rest.

The researchers carried out two experiments using mice that developed lung tumors and cachexia. In one, they administered a polyclonal antibody that specifically neutralizes PTHrP and found that it almost completely prevented the wasting, while untreated animals became mildly cachexic. In the second, the antibody treatment prevented the loss of muscle mass and improved muscle function, while control animals developed severe muscle wasting.

“You would have expected, based on our first experiments in cell culture, that blocking PTHrP in the mice would reduce browning of the fat,” said Spiegelman. “But we were surprised that it also affected the loss of muscle mass, and improved health.”

The research suggested that PTHrP alone doesn’t directly cause muscle wasting, yet blocking the protein’s activity prevents it. Thus, the role of PTHrP “is definitely not the whole answer” to the riddle of cachexia, noted Spiegelman, but it may be a necessary part, with other factors also involved.

A collaborator on the study, Vickie E. Baracos at the University of Alberta in Edmonton, Canada, provided blood from 47 patients with lung or colon cancer who were cachexic. First author Serkan Kir from the Spiegelman lab, a Robert Black Fellow of the Damon Runyon Cancer Research Foundation, found increased levels of PTHrP in 17 of the patients; these had significantly lower lean body mass and produced more heat energy at rest than the other patients in the group.

It may turn out that the PTHrP mechanism is responsible for cachexia in a subset of cancer patients, but not all, Spiegelman suggested. Before trying the anti-PTHrP antibody in human patients, he said, “clinicians would probably first want to find out if the protein is elevated in certain cancers, and determine which patients would be good candidates for a clinical trial.”

Barrett Rollins, Dana-Farber’s chief scientific officer, commented that the report from Spiegelman and his colleagues “provides a new road map for developing a rational, mechanistically based treatment for this incredibly debilitating condition that occurs in such a large number of our patients. Until now we’ve had no truly effective way to reverse this horrible complication.”

Patients with upper gastrointestinal and pancreatic cancers are the likeliest to develop cachexia, which affects about 80 percent of terminal cancer patients. Currently these patients are given appetite stimulants and nutrient supplements, along with medications to counteract some of the molecular pathways believed to underlie the wasting process, but this treatment has had only limited success.

The research was supported by National Institutes of Health.