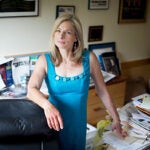 Every spring, as the weather warms, trees up and down the East Coast explode in a display of bright green life as leaves fill their branches, and every fall, the same leaves provide one of nature’s great color displays of vivid yellow, orange, and red.

Thanks to climate change, the timing of those events has shifted over the last two decades, Harvard scientists say.

Andrew Richardson, an associate professor of organismic and evolutionary biology, and research associate Trevor Keenan worked with colleagues from seven different institutions on a study that found that forests throughout the eastern United States are showing signs of spring growth dramatically earlier, and that the growing season in some areas extends further into the fall. The expanded growing season, they say, has enabled forests to store as much as 26 million metric tons more CO2 than before. The work is described in a June 1 paper published in Nature Climate Change.

“What we find in this paper is an increase in the growing season of forests in the eastern U.S. due to recent climate change,” Keenan said. “This has been beneficial for forests in the past, but we do not expect the response to continue unchecked in the future. It must also be kept in mind that this positive effect of warming is but one amid a barrage of detrimental impacts of climate change on the Earth’s ecosystems.”

The fact that forests can store more carbon is a good thing, but both Keenan and Richardson warned that it’s far from so good as to cancel the potential devastation of climate change.

“And climate change isn’t just about warmer temperatures. It’s also about changes in precipitation patterns … so in the future, an earlier spring might not help forests take up more carbon if they end up running out of water in mid-summer.”

By collecting data across different scales, Keenan was able to capture both a regional picture of the eastern forest — which stretches along the seaboard from Maine to Georgia, and as far inland as Wisconsin — and a more granular measurement of individual sites.

Using satellite data, Keenan tracked when forests across the region began to green in the spring, and when leaves began to turn in the fall. Ground observations made every three to seven days at the Harvard Forest in Petersham and at a long-term research site in New Hampshire provided information about the state of buds, leaves, and branches.

When combined with records from instrument towers, the data sets allowed the researchers to paint a richly detailed picture that shows spring starting earlier, and a growing season lasting longer than at any point in the past two decades.

“Basically, we showed that there are three different ways of looking at this, and they all show the same result — spring is getting earlier,” Richardson said. “When you look at the patterns across both space and time, and year-to-year at individual sites, and when you look across different species, the same patterns hold up … that gives us confidence that there’s something going on.”

Another important result, Richardson said, was the discovery of a significant source of error in existing computer models on how forest ecosystems work. It turns out that these models don’t properly reflect how spring and autumn temperatures control the start and end of the growing season.

“What that means is if you run these models forward 100 years, they won’t be accurate,” he said. “This shows an opportunity to improve the models and how they simulate how forests will work under future climate scenarios.”

The real power of the findings, however, may be in helping make the effects of climate change more tangible to the public, the researchers said.

“If you tell people the leaves are going to start coming out in mid-April, and it used to be in early May, that’s something people can relate to more easily than describing temperature-change records,” Richardson said. “People are just inherently fascinated by the passing of the seasons and weather, and how those two are connected.”