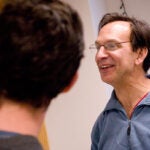 If you have it, you probably don’t know it. Cytomegalovirus, or CMV, is perhaps one of the biggest pathogens you’ve never heard of — big both proportionately and epidemiologically. It contains approximately 200 genes, compared to HIV’s paltry 18, and it’s everywhere. You can catch it as a preschooler salivating over blocks, or as a teenager experiencing your first kiss. Once you have it, you have it for life.

The good news: If you’re healthy, it’s harmless. Your T cells keep it in check, and you’ll be none the wiser.

The bad news: If you have any medical condition that dampens your immune system, such as HIV infection or a recent organ transplant, the virus can assert itself with a vengeance. The results, sometimes, are life-threatening.

Researchers in the lab of Steven Gygi, professor of cell biology at Harvard Medical School, report that they have discovered a menu of tactical secrets CMV employs. Using mass spectrometry, a technological platform commonly employed in physics and chemistry, the researchers were able to describe the dynamics of a CMV infection in a fibroblast, or connective tissue cell, over a three-day course of infection. As a result, the researchers discovered ways CMV evades the immune system, and also showed how certain viral proteins target and destroy human proteins that defend against infection.

“This is an entirely new way of studying the behavior and tactics of viruses,” said Gygi.

These results are published in the June 5 Cell.

Mass spectrometry has existed for more than a century, used primarily by physicists and chemists to describe and measure small molecules. Inside the mass spectrometer tool (or mass spec), molecules are shattered by an electric charge and then brought through a magnetic field where they are characterized one by one.

Traditionally, this approach has not been relevant for the life sciences because biomolecules such as proteins are too large for the process. But over the last 15 years, Gygi has been innovating ways to incorporate mass spec into biology. In one approach, “electrospray,” subunits of proteins called peptides are vaporized and then sprayed into a chamber where they are broken apart by helium. The mass spec then sequences the amino acids of each peptide. The molecules are “reassembled” through an algorithm that matches them to a protein database.

Michael Weekes, a postdoctoral researcher in the Gygi lab and an expert in infectious disease, decided to use mass spec for virology. He chose CMV because, for a virus that is so widespread, very little is known about it. “Many scientists are interested in CMV, but few if any have tried to tackle it in a comprehensive way before,” he said.

Weekes took a sample of fibroblasts newly infected with CMV, harvested the proteins from both the virus and the cell, and sprayed them into the mass spec at different times over three days in order to construct a thorough trajectory of infection. The first three days of infection are particularly important since they mark a covert stage in which the virus hijacks, but hasn’t yet destroyed, the cell.

The researchers were able to study approximately 8,000 total proteins, identifying not only ways that CMV evades the immune system, but also discovering a number of new therapeutic targets. Most notably, they were able to look closely at proteins that live on the cell surface. This is especially crucial since most drugs target cell surface proteins, yet these proteins are harder to study than proteins inside the cell due to their low numbers.

Weekes and his colleagues found 29 viral proteins living on the cell surface, 23 of which had not been discovered previously. Many of these CMV surface proteins deter immune cells. Others block cellular proteins that activate immunity. In other words, CMV wards off rescuers while disabling a cell’s ability to defend itself.

“So much of this viral genome is dedicated to simply evading the immune system,” said Weekes.

The next step, according to the researchers, would be to identify antibodies against many of these viral proteins, ideally destroying infected cells before they replicate and spread the pathogen.

“This would be an entirely new way to combat CMV,” said Weekes.

This study was funded by the Wellcome Trust Fellowship and a National Institutes of Health grant.