Tomorrow isn’t such a long time 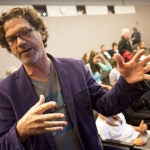 Now available on the Web? Smells

Whatever the answers to preserving our world’s natural resources might be, it seems clear that they won’t come overnight. How, then, can scientists and governments ensure that the steps they take today won’t jeopardize the fate of future generations?

The answer, Harvard researchers say, may lie in part in a cornerstone to modern society — democratic process.

Martin Nowak, a Harvard professor of mathematics and biology and the director of the Program for Evolutionary Dynamics, and David Rand, an assistant professor of psychology and economics at Yale, worked with colleagues on a study in which allowing people to vote on the harvesting of resources led to the preservation of the resources for future generations. The study is described in a June 26 paper published in Nature.

Nowak and Rand joined with doctoral student Oliver Hauser and postdoctoral researcher Alexander Peysakhovich to adapt a commonly used “public good” game in which five online players are tasked with dividing up 100 units of a resource.

Though the game was clearly designed to encourage players to preserve resources for subsequent generations, Nowak and Rand initially found a curious result — in nearly every game, players quickly exhausted the resource.

“Typically, the way it played out was four players acted generously, while one person chose maximum defection,” Nowak said.

Though the test revealed that many people might be willing to pay some cost to benefit future generations, it also highlighted a problem connected to what researchers call “conditional cooperation,” which suggests that people are willing to cooperate only if they believe others are doing the same. Often, Rand and Nowak said, players who chose to maximize their own benefit did so because they feared other players were taking a larger share of the resource.

“In some sense, this illustrates why the free market fails to solve problems like climate change,” Nowak said. “Even if you want to cooperate with the future, you may not do so because you are afraid of being exploited by the present.”

To address that problem, Nowak and Rand rewrote the rules of the game so that each player was allowed to vote on how much of the resource to extract, and each was given the median of all five votes.

“Democracy is a powerful institution,” Nowak said. “When we implemented this system, virtually every resource was saved. The surprising observation is that while there is a minority of people who don’t want to cooperate, the majority of people vote altruistically. They are not voting to maximize their own benefit, and that’s what allows for cooperation with the future.”

Importantly, Nowak and Rand said, for the voting system to work, the winning extraction amount had to be the median of all the votes cast.

“Another way to implement a voting system would be to extract the average of all the votes, but the problem with that system is it forces people to vote strategically,” Rand said. “You may be willing to harvest the resource sustainably, but if you think someone else is going all in, you have to vote for zero to balance out the average. If instead you use the median of the votes, then players can just vote for what they really want.”

The finding that people are willing to vote altruistically, Rand said, runs counter to the oft-cited notion that people will ultimately act in their own interests when they go to the ballot box.

“A huge amount of public policy is built around the assumption that everyone is selfish. The question for policy-makers has always been how to set up an institution that encourages people to do good things even though they’re selfish.

“The key take-home message of our paper is that policymakers can take advantage of the fact that many people are not actually selfish,” he continued. “A lot of people are altruistic, and you can have more efficient and more effective policies if you take this into account.”