The genesis of genius 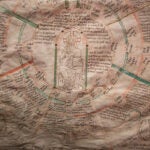 Flames of childhood passion often die. How many astronauts and ballerinas are among us? Yet some talent is so profound that even early efforts signify genius.

The tiny, hand-lettered, hand-bound books Charlotte and Branwell Brontë made as children surely qualify. Measuring about 2.5 by 5 centimeters, page after mini-page brims with poems, stories, songs, illustrations, maps, building plans, and dialogue. The books, lettered in minuscule, even script, tell of the “Glass Town Confederacy,” a fictional world the siblings created for and around Branwell’s toy soldiers, which were both the protagonists of and audience for the little books.

In 1829 and 1830, Charlotte and Branwell cobbled the pages together from printed waste and scrap paper, perhaps cut from margins of discarded pamphlets. They wrote with steel-nibbed pens, which tend to blot, yet the even script demonstrates their practiced hand.

Charlotte, who in adulthood wrote “Jane Eyre,” nested leaves together, then neatly sewed the spine with embroidery thread; it’s evident she constructed her book and planned its content before ever putting pen to paper. Branwell, who would become a painter and poet, stacked folded leaves together, which allowed him to add pages as he needed; clearly not as adept with needle and thread as his sister, he stab-sewed the leaves together with thicker linen yarn.

Children can be rough on their playthings — miniature books created by the younger Brontë siblings Emily and Anne did not survive — but Charlotte kept and stored the “Glass Town” adventures carefully. “They must have been very precious to them, as they are to us today,” said Priscilla Anderson of Harvard’s Weissman Preservation Center, who restored the volumes.

Only about 20 volumes of Brontë juvenilia are known to remain. Harvard holds nine, the Brontë Museum at the family home in England owns a few, and the remaining are scattered among museums and private collectors.

Until recently, juvenilia — works produced by an author or artist while still young — were viewed as oddities by scholars and collectors. Today they are understood to provide valuable and rare insight into an author’s development. In the case of the Brontës, experts might trace Gothic influences from the 13-year-old Charlotte’s stories, or identify Branwell’s growth as an artist by comparing his childhood illustrations and his later paintings. Perhaps even more importantly, the books provide a glimpse into the inner lives of children growing up in a society in which they were expected to be seen and not heard.

“What is extraordinary is the extent to which they imitated a professional publication, the variety of the content, and the perseverance it required,” said Anderson. “The ability to make these volumes from start to finish out of scraps is impressive.”

At nearly 200 years old, the books are delicate. Over time, the paper became increasingly fragile, the adhesive used to mount the volumes damaged the covers, and the tiny script was hard for scholars to read. To ensure that scholars today and tomorrow have access to these treasures, the library repaired, rehoused, and digitized the books. Their unusual size, age, and nature presented several challenges to Anderson and Debora Mayer, the Helen H. Glaser Conservator at Weissman.

“Perhaps children’s eyes and hands can read and manipulate these things, but for grownups they’re microscopic,” explained Anderson, who said she felt like she had giant’s hands when she worked on the books.

To repair tears, Anderson used fine surgical instruments, teasing out and pasting down individual fibers of kozo paper about the width of a human hair. (Kozo is a fine paper made from the inner bark of an Asian plant, and is regularly used to mend books.) All through the painstaking work, she knew even a small mistake would be magnified. “I held my breath, literally,” said Anderson, “to keep fragments of paper from blowing away.”

New binding exposed text in the gutters of Branwell’s volumes for the first time in 170 years, and the digital technology deployed provides clarity beyond that of the human eye. Technicians moved the camera very slightly on multiple takes and combined them into one image. Every millimeter is sharply focused.

Charlotte’s husband sold the volumes after her death to a collector, who gave them to poet and fellow collector Amy Lowell; she donated the set to Houghton Library in 1925.

The digital copies of the Brontë juvenilia have largely met scholars’ needs, according to Houghton curator Leslie Morris. Yet the awe-inspiring physicality of the books as artifacts cannot be captured on screen.

“These tiny books help to evoke the whole experience of the Brontë children. Here they are, living in a somewhat isolated parsonage in Yorkshire, having only themselves as playmates and needing to entertain each other,” Morris said. “Seeing the physical object brings home the effort and intelligence it took to create them and why they created them. Having grown up with Brontë, it’s a way of connecting with the past through objects.”

The nine Brontë volumes held by Harvard referenced in this story are available in full, free, online:

By Charlotte Brontë:
Scenes on the great bridge, November 1829
The silver cup: a tale, October 1829
Blackwoods young mens magazine, August 1829
An interesting passage in the lives of some eminent personages of the present age, June 1830
The poetaster: a drama in two volumes, July 1830
The adventures of Mon. Edouard de Crack, February 1830