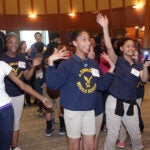 Installation of new bell at Memorial Church an impressive sight

Justin Mullane, the church’s director of communications, occupies an office about 200 feet below the bell. “I remember the noise” — closer to a feeling than to a sound and “terrible,” he said, like an aluminum bat hitting a steel pole.

In August 2011, the clear ring of the Memorial Church bell — a familiar alert to the start of morning prayers and the top of a new hour — gave way to a harsh, much louder peal. Passersby, and even students at Harvard Business School across the Charles River in Allston, noticed the difference. “You could feel it in your body, resonating,” said Mullane.

This week, a work crew that included an employee of John Taylor & Co., the foundry in Loughborough, England, where the bell was cast in 1926, removed it from the church’s tower and replaced it with a gleaming new instrument, a 2-ton mixture of copper and tin recast by Taylor & Co. using original molds, or “crook plates.”

The new bell in town

Among the small crowd watching the operation was Edward Jones, the church’s Gund University Organist and Choirmaster, who arrived just before 8 a.m. with his two young sons in tow.

“It’s a real piece of Harvard history … and of our active community, and I think it’s great that we have a new one,” said Jones, who acknowledged that the main attraction for his boys, Henry and George, wasn’t the new bell but the massive machinery putting it in place. “We’re here for the crane, more importantly.”

While an automated recording worked well as a temporary replacement, “there’s something really powerful about a real bell tolling,” Jones said.

That real peal will be back soon, almost a century after Harvard President A. Lawrence Lowell donated the bell for Memorial Church, Harvard’s new spiritual home and a monument to those who died in World War I, dedicated on Armistice Day, 1932. (Lowell is also credited with the bell’s poignant inscription: “In Memory of Voices That Are Hushed.”) Foundry Director Paul Mason joined with a team of electricians during the week to fine-tune the mechanical system that will toll the bell automatically.

The bells of Harvard have not always been met with welcome, particularly among sleep-starved undergrads. The authors of “Harvard A to Z” report that, when, long ago, the morning peal from Memorial Hall was at 5:30 a.m. (before being shifted to 7:30), students tried various ways to silence it. They stole the bell’s clapper, barred the entrance to the belfry, and in the winter months turned the bell upside-down and filled it with water so the clapper would become trapped in ice. More recently, sleepy freshmen have resorted to a Facebook campaign to try to stop the morning ringing of the Memorial Church bell.

Today, in addition to ringing for morning prayers and at the top of the hour from 9 a.m. to 4 p.m., the Memorial Church bell, 5 feet in diameter and 4 feet tall, is used during class memorial services and on special occasions, including Commencement exercises. It was rung following the attacks of Sept. 11, 2001, and last year’s marathon bombing.

At 6 a.m. Monday a flatbed truck carrying the new bell rolled into Harvard Yard, accompanied by a giant yellow crane. By 8:30 a.m. the old bell had been eased out of its tower home with the help of a hydraulic lift and onto a carefully constructed platform high above Tercentenary Theatre. Next, workers secured the bell to the crane, which gently lowered it to the ground, where a few onlookers snapped photos with their phones. Officials said the original bell will remain in storage until a decision is made about its future.

After a break, workers removed a wooden crate to unveil the old bell’s shiny successor. (One bystander’s “awesome” was representative of the general response.) The crane then reversed the process, carefully lifting the huge bell toward the tower. The vertical lathe used to grind down its outer layer to produce the appropriate pitch, the key of C, had left a golden gleam on the underside of the bell.

“We are very excited to have a new bell here,” said Lucy Forster-Smith, Sedgwick Chaplain to the University Senior Minister in the Memorial Church, who gazed up at the tower as the new bell was set in place.

“We can have an actual bell ringing, and not a recording,” she added, “which is great.”