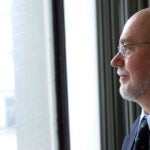 A native of the province of Galicia and life-long resident of the city of Santiago de Compostela, Serafín Moralejo chose the city’s imposing cathedral as the center of his scholarly investigations. In his twenties, he was already publishing seminal studies on the imposing sculptural compositions (both extant and missing) that adorned the cathedral in the eleventh through thirteenth centuries and their relation to the sculptural traditions of the Camino de Santiago, the pilgrimage route of Saint James. In the prologue to one of his books, John Williams, the leading expert on Spanish medieval art in North America, credits Moralejo with demonstrating the importance of Spain’s contributions to the art of the Pilgrimage Route School by means of one seminal discovery. With a sharp eye for detail, the young historian identified a surprising but utterly convincing source for Camino iconography: a Roman sarcophagus that in the eleventh century could still be seen in a hamlet called Husillos in the Old Castilian province of Palencia. This discovery left no doubt that images found on cathedral porticos in Jaca, Fromista, and Santiago de Compostela itself had originated not in Navarre as previously suspected, but in the power center of León-Castilla.

To the magnificent sculptural traditions of the pilgrimage route, and particularly to the cathedral of Santiago de Compostela itself, Moralejo would devote the greater part of his energies. One colleague and former student observed that Moralejo was destined to become an outstanding scholar in the art of the pilgrimage roads, not only because he was born in Compostela, but because his father, Abelardo Moralejo, Professor of Latin at the city’s university, had been first to translate into Spanish the twelfth-century Codex Calixtinus. On the basis of the description found in this celebrated manuscript he was able to reconstruct the original design for the cathedral’s two Romanesque porticos, one of which had been completely remodeled and the other of which had disappeared entirely. This early project, submitted as a Master’s thesis, led to a doctoral dissertation focused on the sculptural program of the cathedral. Blessed with consummate skill as a draftsman, Moralejo kept copious sketchbooks filled with elegant, detailed pen-and-ink renderings of the monuments he sought to place in historical context. His talent for drawing was harnessed to his unabashed delight in the richness of medieval imagery and not infrequently to his irrepressible and sometimes irreverent sense of humor. In a sketch of a celebrated relief found at the Benedictine monastery of Santo Domingo de Silos, Moralejo rendered the classic grouping of Christ’s twelve apostles emerging from a half-opened tin can, like so many sardines. He was also given to drawing caricatures of colleagues during faculty meetings.

Moralejo’s art-historical scholarship was further enriched by broad and deep familiarity with the textual traditions of European culture. His published studies are thoroughly grounded in an astonishing array of humanistic references. One of his own theoretical monographs opens by proposing François Villon’s Ballade faite pour Notre Dame, spoken in the voice of the fifteenth- century French poet’s mother, as the poetic analogue of a medieval fresco. It is no surprise that such dazzling literary competence would make Moralejo a valued interlocutor for his colleagues in literature on this and other campuses. In classes, books, and lectures, he often cited chapter and verse from Scripture, recited Virgil in Latin and Plato in Greek, and might even correct another speaker who had the misfortune to get his sources wrong. His students remember his impressive control of disciplinary and inter-disciplinary bibliography, both specialized and theoretical, both Spanish and international. On the occasion of his first lecture at Harvard, colleagues remember vividly his passion to communicate the complex web of theological, political, and human stories preserved in stone, a need so strong that it made his then still halting English strikingly eloquent.

In 1978 Moralejo won his first professorial appointment at the Universidad de Santiago de Compostela and put forward what was, for the time, a bold theoretical proposal that he would later publish as a major monograph in 2004. In “Formas elocuentes. Reflexiones sobre la teoría de la representación” (Eloquent Forms. Reflections on the Theory of Representation), Moralejo argued from an extraordinarily varied collection of examples that accurate understanding of visual artifacts must be based not on the presumed ordering and determining power of artistic styles (Romanesque, Gothic, etc.), but instead on the history of particular images and collections of images.

An admired and loved teacher, Moralejo often said that teaching was as much research for him as studying his books. Amongst the courses he taught at Harvard one of the most memorable was on medieval cartography, in which he introduced students to the medieval perspective on the world through the study of maps. Students’ questions gave him much to ponder and investigate, and he was often inspired by their queries, which he pursued with enthusiasm. In his seminars he was always eager to introduce students to new epistemological approaches to art history. His generous encouragement and advice to his graduate students, given with a touch of fine criticism, was always much appreciated.

Serafín Moralejo’s time at Harvard was all too short. In 1993, following a visiting professorship, he was the first scholar appointed to the Fernando Zóbel de Ayala Professorship of Fine Arts, established to honor the distinguished painter and founder of the Museum of Abstract Art in Cuenca, Spain. He moved to Cambridge, where his wife, Queca Cacheiro, daughter, and son often joined him. Living just around the corner from the newly founded Real Colegio Complutense, he became a valued interlocutor in that center’s inter-disciplinary gatherings. Tragically, Serafín Moralejo’s teaching and scholarly career were cut short by degenerative brain disease, which dictated his return to Spain in 1998 and led to his death in 2011.

Professor Moralejo will be remembered as one of the most distinguished scholars of Spanish medieval art and a worthy successor to Arthur Kingsley Porter, the founder of scholarship on the sculpture of the Pilgrimage Roads.